What Retailers Can Learn from the Cannabis Industry 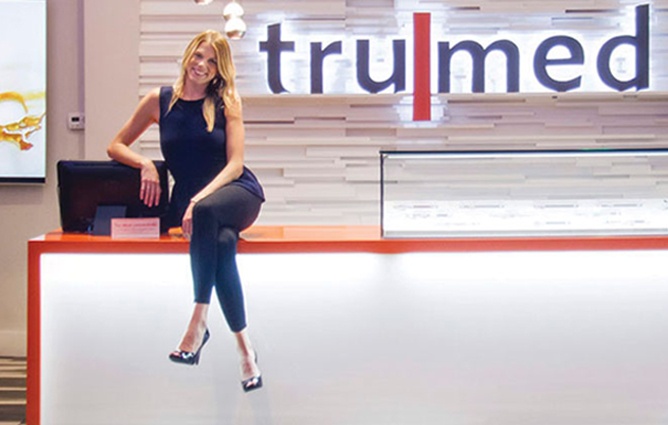 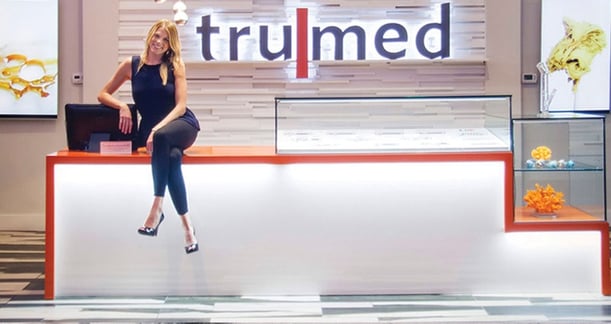 Megan Stone’s list of accolades more than qualifies her as one of retail design’s latest up-and-coming stars.

A couple of Shop! Design Awards and a 40 Under 40 nod from design:retail magazine make up just a small taste of the success Stone has had over the past few years. She’s also been featured in several publications nationwide.

It’s a set of accomplishments made all the more impressive considering Stone has only just celebrated her design studio’s fourth anniversary. More fascinating still, none of this would have been remotely possible for her merely a decade ago.

The reason – her entire niche barely existed back then.

Now America’s leading authority on cannabis dispensary design, Stone is in demand and busier than ever.

“The cannabis industry is exploding.

“Several new states are coming online this year. California will finally be a regulated market and become the largest market for cannabis in the world. There’s a lot of innovation, creativity, and growth ahead,” Stone said. 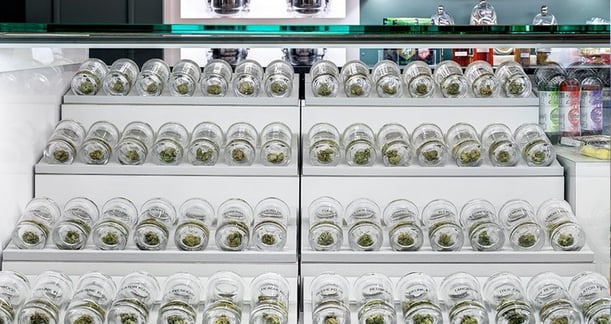 Recently confirmed as a speaker at RetailSpaces 2017, Stone will be in the spotlight as she shares some insight into her unique corner of the industry. The idea that dispensary design might lend itself to mainstream retail in some way may have seemed absurd once upon a time, but Stone’s gathering momentum suggests otherwise.

First introduced to the cannabis sector as a patient, and then on the other side of the counter as a budtender, Stone has since revolutionized the way cannabis is sold. Her company, The High Road Design Studio, is known for creating classy, boutique spaces, radicalizing the traditional look and feel of dispensaries.

“I really saw an opportunity to help craft and shape perception,” Stone said.

“Cannabis is a life-enhancing product. It saves lives. The people I served every day in the dispensary were people who needed this product for health purposes. That is who this industry serves. It’s not the stereotypical stoner hippie.”

Creating this new dialogue with customers is where Stone has really triumphed. Walking into one of her shops is so far removed from the glaring lights, barred windows and intimidating security presence typically associated with cannabis dispensaries.

For instance, walking into The Healing Center in San Diego, customers are greeted by a lush, suede feature wall of the richest purple, emblazoned with the store’s simple, yet sophisticated branding. In finding the perfect color palette for the outlet, Stone took inspiration from the color of her client’s favorite strain of cannabis.

“I try to always thread that DNA of the product into what I’m creating so that people on the surface can experience and appreciate it,” Stone said. 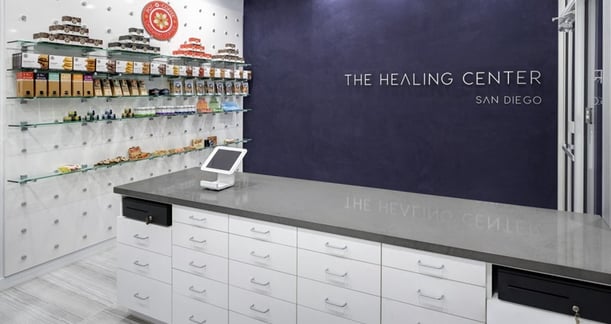 By incorporating an evocative connection to the product, her designs elicit an emotional response from customers.

“I want people to feel how the design is derived from cannabis itself. I want them to look at it and see how beautiful this product, this piece of nature can be. It’s not criminal, it’s not deadly, it’s not dangerous, it’s not dirty. That’s what I love about design,” Stone said.

In working toward removing the stigma and making the cannabis sector more accessible, Stone’s designs require a focus on facilitating customer education.

“My clients deal with people who have a myriad of questions. You have to be able to explain all the different products, how they’re used, how they’re consumed, everything,” Stone said.

As a result, Stone’s works have a strong experiential feel – something the retail industry as a whole has already begun to move to in the face of increasing online sales and dwindling foot traffic.

''They have to go from selling products to a 21-year-old male to helping a patient who's a 65-year-old grandmother looking for palliative medical care. More than anything, these stores are a point of human connection for accessing the industry,” Stone said.

To those unfamiliar with the trade, the incredibly varied nature of the cannabis customer base is likely its most surprising facet. Stone says senior citizens and women make up the fastest growing demographic accessing marijuana outlets, which is a far cry from traditional customers of the past.

As such, making stores as inclusive and inviting as possible has been a huge goal for Stone, and an approach many other retailers would do well to adopt. For sectors like automotive and hardware, which cater predominantly to male shoppers, widening the customer base would generate more sales and grow a company’s potential.

“A lot of retailers probably have a lot more products in their arsenal that are multi-demographic than they think they do. It’s just a matter of understanding how to speak to more than one type of clientele,” Stone said.

Maintaining such an open-minded approach will be key to cannabis retailers as they seek to overcome future hurdles, in an industry still susceptible to the same major challenges facing mainstream retail.

“Right now, marijuana retailers are lucky because people actually have to go into a store to buy it. But eventually, when delivery is regulated we’re going to become just like every other retail sector struggling to balance online versus in-store experience,” Stone said.

This scenario is already shaping up as a challenge for physical dispensaries in fully legalized states. An open marketplace has allowed for the rise of companies like Meadow and Eaze –  quickly establishing themselves as an Amazon-esque presence. Platforms offering an entire digital framework for cannabis distributors could provide clients access to a suite of patient registration, inventory management capabilities as well as online and mobile ordering services.

Learning to coexist with a blossoming online retail presence is something physical brick-and-mortar chains have struggled to come to grips with for several years. It’s an issue that is only compounding as millennials come of age, boasting immense buying power.

“The cannabis industry is highly millennial driven. It nearly feels as if we’re waiting for the older generation to move over so that those views and antiquated ideas are out of the picture,” Stone said. 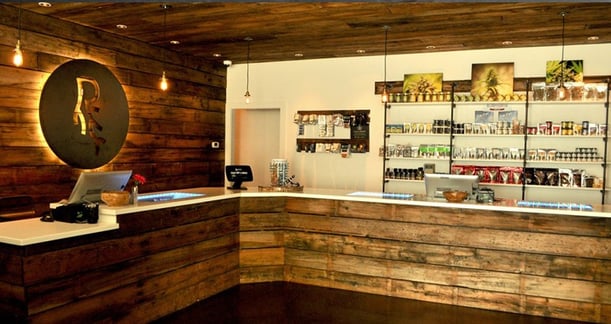 While the rest of the industry scrambles to find a way of luring the younger foot traffic, Stone believes cannabis retail is succeeding in its ability to resonate with millennials. Instead of seeing the entire generation as a threat, businesses need to re-examine their approach.

“It’s always interesting to hear the two different sides of it.

“It’s been so long since I’ve interacted with the stereotypical, lazy, Hulu-watching, self-entitled millennial.

“I’m familiar with the side of our generation that was forced to, because of the recession, create something for ourselves based on our passion and fight for anything we wanted while leveraging all the digital resources we have to our advantage,” Stone said.

“Some retailers have really mastered it. Brilliant retail concepts have come in the last few years because of paying attention to millennials and the way we want to shape the world.”

Though Stone’s success has by no means been an easy feat. Due to endless, complicated legalities and the constantly evolving nature of the cannabis industry, Stone’s work is subject to a sea of troubles completely foreign to traditional retail.

“From state-to-state, and even city-to-city the business side can be very different,” Stone said. “For example, if a state’s laws prevent the product from being on display, that drastically affects what experience my client is going to be able to provide in-store.” 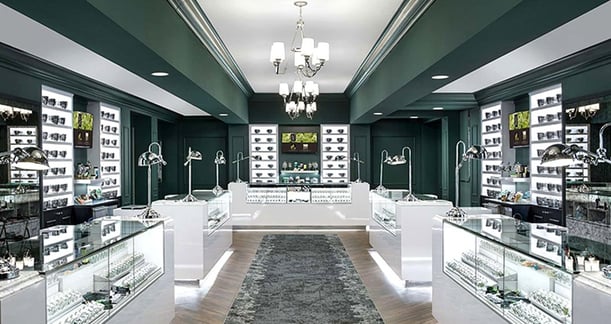 As she continues to pioneer the industry, there’s no shortage of ongoing issues to contend with.

“You have to remember we’re starting after decades of prohibition and misinformation, so changing public perception isn’t easy,” Stone said. “There’s also a high level of uncertainty that exists this year, given the current administration. They’re definitely keeping us on our toes.”

However, perhaps the biggest advantage working in Stone’s favor is her passion and drive for creating change. While not every retail sector has the unique opportunity to help fuel an entire social movement, an inspired, open-minded approach is essential to keeping ahead of ever-changing societal expectations.

“Creating sustainable designs, maintaining the integrity of the store and the level of service as well as that human element  – this is important for designers to think about. Otherwise, we’re going to lose it all to the digital age,” Stone said.