The Future of Retail: Showrooms, BOPIS and Pop-Ups 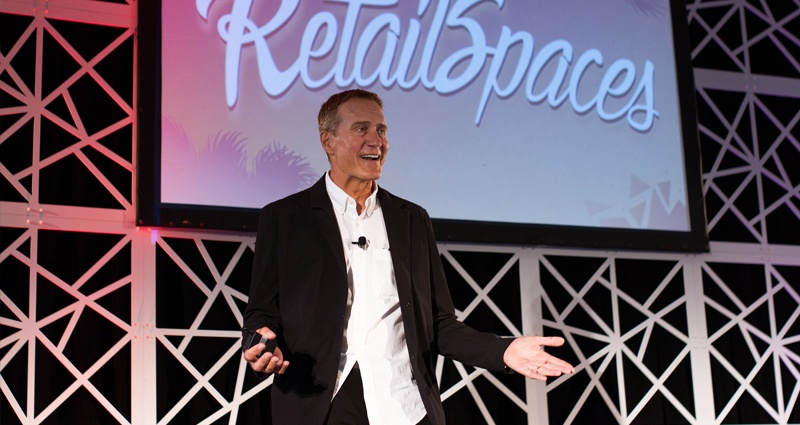 If retailers were looking for respite from the harsh truths coming thick and fast of late, it isn’t likely to come soon.

Not only have e-commerce sales doubled in just the last five years, according to WD Partners’ EVP of Strategy, Brand and Design, it’s a trend that will undoubtedly continue. Taking the stage at RetailSpaces, Lee Peterson predicted in another five years’ time, online purchases will eclipse those made in-store, across all categories.

Rather than continue to see this as a problem, he said it was beyond time brands swallowed a difficult dose of reality and moved on.

“People don't have to go to stores anymore. So you have to make them want to go."

“We fought it for a while, but it's happening.” Peterson said.

Exactly how retailers can use brick and mortar stores more effectively in a digital world has been the focus of WD Partners’ latest research. Aptly titled “The Good, The Bad and The Ugly,” when released, the study will provide an overview of the current state of retail. It will also shed some light on the emerging concepts, or “loaded guns,” resonating most with consumers.

The Bad and The Ugly

Before providing a sneak peek at what those loaded guns are, Peterson dished out the badder, uglier news first.

However, there was one metric in particular sure to keep the sector up at night.

“Foot traffic has been off 10%, year over year for the last 5 years. To me, this is the real monster.”

There were considerable store openings to counter the approximately 7,000 closures in 2017. Though Peterson said it’s important to take this statistic with a grain of salt, as most of those cutting ribbons are dollar stores.

"Getting to good" will require recalibration. For instance, Peterson said retailers need to understand that the key performance indicators of today look radically different from just a few years ago. 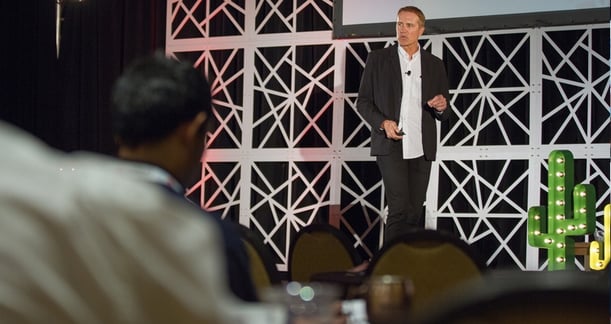 “We’re still measuring stores in the same way that we were before. If online sales have doubled, your in-store sales are just not going to be the same,” he said.

“Last year your like-for-likes might have been down five percent... That doesn’t matter anymore.”

With the insatiable rate of e-comm growth now impossible to ignore, the imperative should be to embrace the shift to online. That may mean devising ways physical retail can boost your online strategy, instead of the other way around.

“When an e-commerce company opens up a new store, their online sales go up 52 percent,” Peterson said. “That just goes to show, your stores can lift online sales.”

Proving to be one of the most effective new additions to a retailer’s arsenal...Showroom stores.

“Showroom stores are a loaded gun. Bonobos has been doing $2,400 per square foot for years,” Peterson said, before posing a challenge:

“Specialty retailers, Where are your showroom stores!?”

To measure the firepower of retail’s future “loaded guns,” WD’s research sought input from 3,000 consumers. The study showed shoppers emerging concepts, canvassing to what extent each one would increase the likelihood of buying.

Showroom stores have been popular with millennials since first surfacing. However, Peterson said the last year and a half has also seen an explosion in the format’s popularity among those older than 45. Overall, showrooms attracted a 58% approval rating.

A trend also gaining attention and popularity among shoppers is the experiential store.

Favored among 49% of respondents, Peterson said some companies are really taking advantage of the format’s potential. In particular, he praised Van's House of Vans skate park/music venues in Chicago and Brooklyn.

“This is probably the most experiential brand portrayal I’ve ever seen. You can go skateboarding, buy a hat or a pair of shoes, and check out a concert. You can also just go there just to hang out,” Peterson said.

While attracting a slightly less enthusiastic response in the study, Peterson noted the effectiveness of pop-up stores in pushing brand awareness. Additionally, the tired, old mall of the 90s may be on the way out. However, friendlier formats modeled around open streetscapes were now finding newfound success.

Companies should also try boosting convenience, especially at the checkout.

Somewhat ironically, on this front, Peterson praised the efforts of e-commerce giant, Alibaba for their cashier-less Tao Cafe.

He also recognized China's BingoBox that allows customers to scan items via an app. They then bag it up and simply leave the store.

These initiatives, as well as others like it, could kickstart widespread checkout experimentation among other retailers and restaurants, especially with 49% of those surveyed favoring the concept.

“That number makes it beyond the testing point. So it’s something retail should really think about testing,” Peterson said.

Bearing a 53% approval rating, there was one loaded gun Peterson said every retailer should already be executing with ease.

“Buy online, pick-up in store (BOPIS). It’s really an important tool you have to have,” he said. “It sounds benign, I know, but we’ve done three studies on it now. Out of everything, BOPIS comes out number one, every time.”

However, correct implementation of the strategy is vital. Peterson said the ideal BOPIS program allows customers to drive up and have goods loaded into the car without ever needing to leave the driver’s seat.

“One of the reasons BOPIS isn’t quite as popular with consumers now is because they’ve run into so much bad execution,” Peterson said. “Walmart is the only retailer, with the exception now of Whole Foods-Amazon, that does BOPIS right.”

Praise for the big box giant didn’t end there.

Pointing to the acquisitions of Jet and ModCloth, Peterson believes Walmart is engineering a smoother transition to the digital age, as well as better understanding the demographic that dominates it.

He said while some retailers have chosen to ignore the warning signs, Walmart has set its sights on innovation and it’s about to pull the trigger. “There’s one question you and your CEOs have to ask yourself:

"Are you being out-innovated by Walmart?”

Though it’s the chain’s purchase of Bonobos which could have the most dramatic impact. Once Walmart optimizes the showroom store formula, what it does next could be a gamechanger.

“We could see showroom toy stores that are only 1,200 square feet. And then what? They can take the size of a 180,000 square foot Walmart and drop it down to 30,000. Then, they have a model they can put anywhere,” Peterson said.

Channelling a little Clint Eastwood from the spaghetti western WD’s study is named after, Peterson closed with a visceral warning for the industry: Those who can’t get it together and grab a gun will likely bite the dust, sooner than they think.

“There are two kinds of people. Either you have the loaded guns, or you’re digging — you’re scrambling, trying to figure out what’s going on and trying to catch up. And then somebody with a loaded gun shoots somebody else,” he said.

You can watch Lee Peterson's full talk from RetailSpaces '17 below. Enjoy!