These 30 Retailers Are Actually Opening Stores 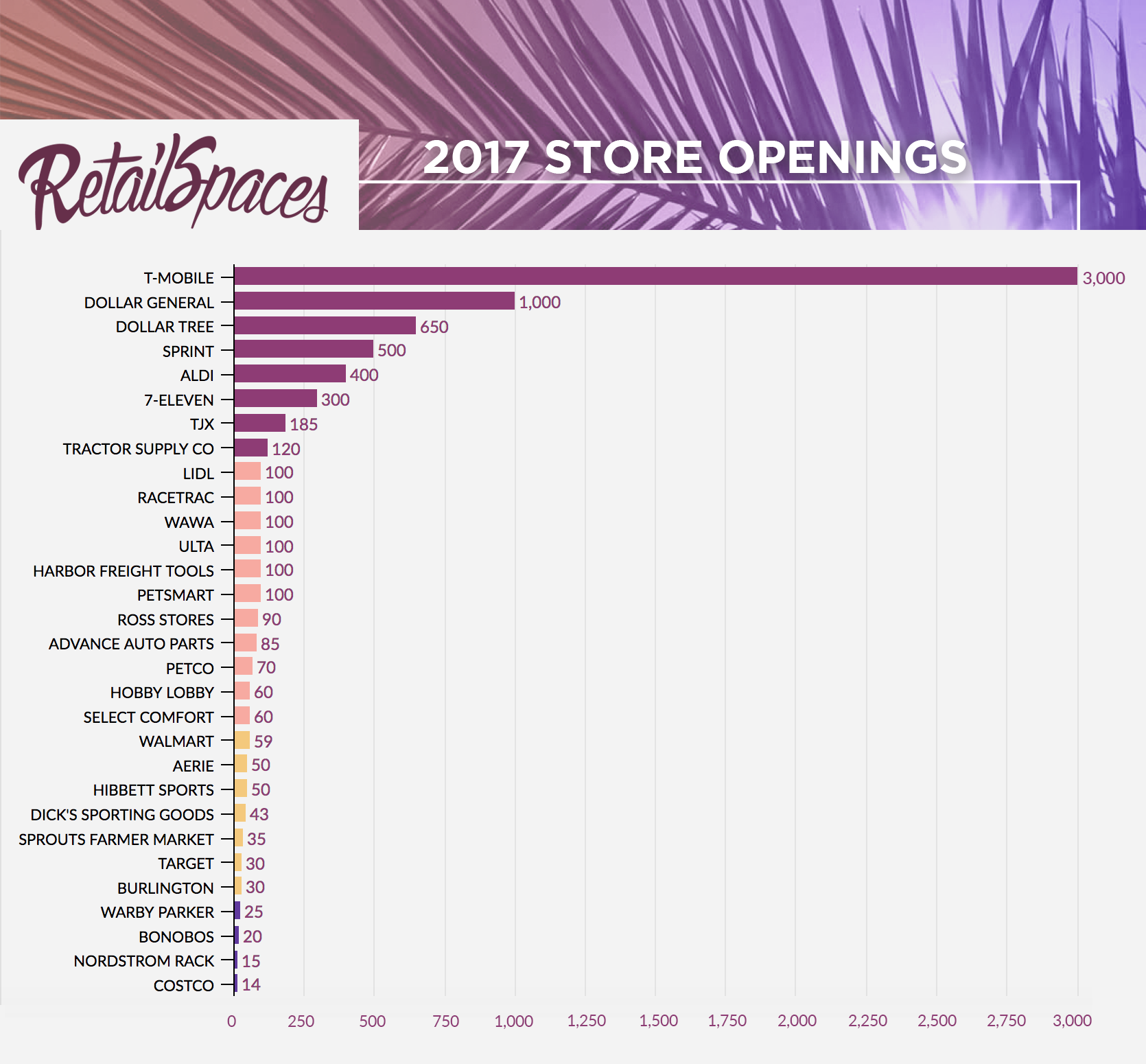 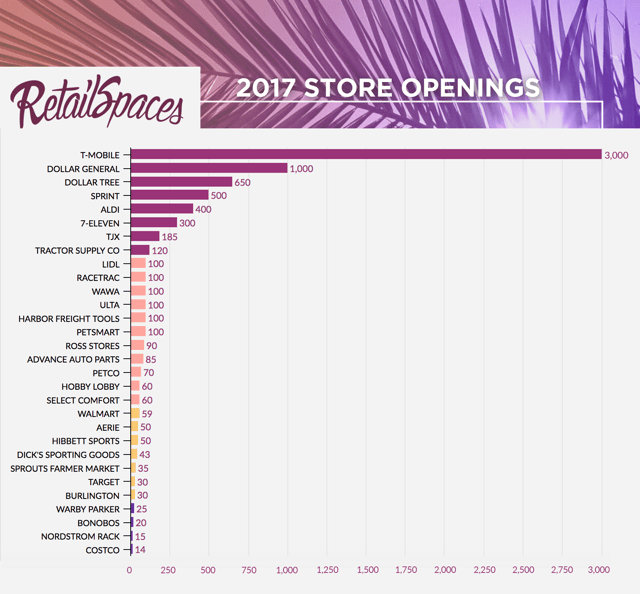 If you’ve turned on the news in recent months, you may have been led to believe that the world is in the midst of a “RetailPocalypse.”

Well, despite all of the “gloom and doom” reports, especially during the year of #Fakenews, you may have missed some other positive headlines that indicate the demise of American retail has been greatly exaggerated

For instance, despite a slight dip, retail sales in May were actually up 3.8% from this time last year. It’s also likely you’re not aware of the retailers that are actually opening stores, instead of closing them.

The following are 30 companies apparently achieving miracles in the face of retail’s meltdown.

As it works to open as many as 85 new stores and convert 200 newly acquired Carquest sites, Advance Auto Parts expects to hire an additional 15,000 people in 2017.

American Eagle has big plans for its teen-centric offering. It’s hoping to increase Aerie’s retail presence from 190 stores to 240 in 2017.

Just this week, the German supermarket announced an extra $3.4 billion investment for its already aggressive five-year US expansion plan. With another 1,000 stores expected by 2022, the move could make it the country’s third-largest grocery chain.

In-store fittings set this men’s clothing retailer apart. Originally an e-commerce operation and relatively new to the brick-and-mortar game, Bonobos expects to have 20 new “guideshops” under its belt by year end.

Burlington is further proof of success in the off-price department store segment. With an extra 30 stores added to the tally, it will boast close to 600 stores by 2018.

The warehouse club retailer will also open a further 29 locations globally in months to come, with 14 of those in the US.

The people at Dick’s moved quickly in the wake of Sports Authority’s bankruptcy, snapping up a handful of newly vacated locations. It will add 43 new stores to its portfolio this year.

When the global financial crisis forced many Americans to hunt for cheaper prices, it led to the unheralded rise of discount stores like Dollar General. It’s one of the biggest movers and shakers of the year, unveiling 1,000 new locations in 2017 alone.

It’s no surprise to see another discount retailer hot on the heels of Dollar General. Capitalizing on demand for low prices and local convenience, Dollar Tree will open 650 stores this year.

A privately-owned discount tool and equipment retailer that’s opened 300 new stores since 2013. This year the company plans to add around 100 stores to their portfolio, continuing their upward trajectory.

This Alabama sports chain has built foundations on servicing smaller communities with less competition. It seems to have paid off, with plans to unveil 50 stores per year over the next decade.

With over 70,000 products available at each location, Hobby Lobby remains the world’s largest privately owned arts and crafts retailer. The chain will open a further 60 stores before 2017 comes to a close.

Aldi’s announcement comes as fellow German competitor Lidl opens its very first store in the US this week. While it expects to have 100 stores by summer 2018, Lidl could have as many as 1,000 US outlets within four years.

Nordstrom’s lower price experimentation at its Rack locations is paying off. Having unveiled 21 of them last year, Nordstrom will be opening 15 more in coming months.

With over 1,500 locations across three countries, Petco is in the midst of a fast-paced growth plan, opening 70 stores in 2016. It’s on a similar path this year, with 21 new additions so far.

Similarly to Petco, PetSmart increased its retail footprint with 73 stores in 2016. More are in the pipeline alongside some boutique concept stores, with US pet owners tipped to spend an unprecedented $70 billion on their furry friends this year.

With over 600 locations sporting round-the-clock hot food, dessert stations and free wifi, RaceTrac’s expansion in southern states continues to build. It will open a further 50 stores over two years in Florida alone.

This retailer is making the most of department store closures, opening dozens of locations last year. 2017 will bring much of the same, as Ross seeks to cut the ribbon on 70 Dress for Less Stores and another 20 dd’s Discounts.

Opening its 60,000th store worldwide last year, the convenience giant also recently acquired Sunoco’s convenience store portfolio, snaring 1,108 new locations across the country in the process. This year they will open approximately 300 new sites in the US.

Going head-to-head with T-Mobile for wireless supremacy, Sprint claims 5,000 extra retail jobs will result as it expands. Company heads claim there’ll be as many as 1,000 new stores over 18 months.

Living up to its name, the healthy living grocery chain will sprout an extra 35 new stores in 2017. In its 15th year, the expansion will bring its store count to nearly 300.

Despite being in the spotlight over store closures last year, the company is shifting its strategy with City Target - opening 30 of the smaller format stores across major cities this year.

2017 will see Marshalls, T.J. Maxx, HomeGoods and Sierra Trading Post continue to grow with approximately 185 new stores added in the US. TJX’s European and Canadian brand, HomeSense, will also make its American debut later this summer.

2016 was quite the year for T-Mobile, attracting 8 million new customers and bringing more competition to the wireless sector with unique data plans. T-Mobile has set an extremely ambitious target of 1,500 new stores alongside 1,500 MetroPCS outlets in 2017 alone.

America’s largest rural lifestyle retailer celebrated opening its 1,600th store in January. Adding 113 new stores last year, it seems on its way to an overall goal of 2,500 outlets across the US.

Making the most of huge success in both e-commerce sales and in-store growth, the cosmetics chain continues to expand. Ulta will add 100 stores to its lineup before year’s end.

Claiming the top spot on the Fortune 500 for the fifth straight year, Walmart continues to assert dominance. In 2017, it will spend $6.8 billion boosting operations, including the opening of 59 new and revamped stores.

The eyewear retailer may be a smaller brick-and-mortar player, only boasting 46 stores. But that only makes Warby Parker’s aspirations all the more impressive, aiming for 25 extra this year.

Serving up built-to-order food and beverages since 1964, 2017 is a big year for the fuel and convenience retailer. It is also in the midst of growth in Florida, with an overall target of 100 new stores for the region.

While it’s difficult to deny the industry has seen better days, to say it’s on the ropes is a bit of an exaggeration – and to report that all hope for retail is lost is plain irresponsible.

The store openings to come won’t offset record closures, however, the resourcefulness and resilience on display is promising.

It’s also important to keep in mind the immeasurable impact Amazon’s brick-and- mortar play is likely to have in the coming years. News last week of the e-commerce behemoth’s $13.7 billion Whole Foods deal is finally giving shape to its supermarket strategy, which involves rolling out as many as 2,000 physical stores around the country. And this is just one piece of the Amazon store puzzle.

We’re not witnessing the “RetailPocalypse.” We’re simply in the middle of a “RetailMetamorphosis”.

As the saying goes: All change is hard at first, messy in the middle and beautiful at the end.

*Store number is an estimate, based on company statements regarding expansion plans over the coming year.