Store Development Leaders Share What Keeps Them up at Night

Looking through store windows of the best-performing brands in 2018, customers are likely to notice the shopping experience is undergoing serious change. If you ask the industry movers and shakers behind all this transformation, they’ll tell you retail is on the brink of an evolutionary shift.

At least, that was the overwhelming response we received from store development and design leaders when we put them on the spot and posed the following questions at RetailSpaces:

“What Are Your Thoughts on the Current State of Retail?”

Like most interviewed, La Maison Simons’ Director of Store Planning, Julie Belanger, believes a revolution is underway. For her, the best shot at future success lies in marching boldly into the turbulent times ahead.

“The current state of retail is ever-changing. It’s certainly very different from what it used to be and we need to embrace that in order to face the challenges going forward,” she said.

To do this, Belanger believes retailers need to strive for greater online and brick-and-mortar integration.

“We need to adapt the stores so that they embrace online, rather than trying to work them separately.”

While many retailers are already experimenting extensively on this front, Shinola’s Head of Store Development, Chris Delusky, claimed the value of creative physical retail design cannot be overlooked.

“The customer experience is becoming so important that even the migration of shoppers online isn’t going to be served so well unless there’s an engaging physical location to support it,” he said.

The Customer is Everything

The last couple of years has seen an undeniable shift toward crafting memorable experiences on the store floor. However, it’s a strategy that will only continue to produce results if companies put their customers at the heart of store design.

“There’s a lot of growth and some retailers are actually expanding,” offered Heidi Barron, the Senior Director of Store Development and Facilities at financial services company Oportun. “But we’re surrounded by stories of store closures and I think it’s time for retailers to focus on what their customers want and how they’re best going to serve them.”

Without this mindset, Naples Soap Company CEO, Billy Zebe, believes companies will only set themselves up for failure.

“If you’re not a retailer that’s forward-thinking, and you’re not thinking about that word, ‘Innovation’ and about your customer, you’re out of business!” he warned.

Though for most of the retailers we interviewed, thinking about the future is something that appears to occupy a lot of their time. This was most obvious when we asked them our follow-up questions:

“What Keeps You Up at Night?

“Rapidly declining foot traffic definitely keeps me up at night,” admitted the head of construction for one of the nation’s largest apparel retailers. “How to bring back customers that left and understanding why they left.”

Meanwhile, others, like Peter Schmitz, remain optimistic despite the fear stemming from ongoing store closures.

“What did keep me up at night is the concern that with brick-and-mortar, people wouldn’t want to touch and feel and have that experience anymore. But that’s not the case,” he said.

“I think the retail armageddon is just a tagline that was created by hedge funds and Amazon,” Schmitz declared. “Then Amazon pivoted and bought brick-and-mortar, so suddenly, brick and mortar is relevant again,” 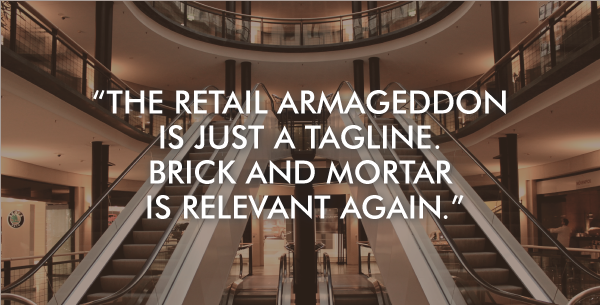 WD Partners’ Lee Peterson says for the industry to remain relevant, retailers need to make daring statements, instead of fretting over outdated benchmarks of success.

“What keeps me up at night is trying to convince retailers that focusing on cost isn’t the most important thing right now. What’s more important is moving to the next phase of retail — coming up with new ideas and changing retail for the good,” Peterson said, before issuing a cautionary reminder: "People don't have to go to stores anymore."

Though for Rajesh Chhablani, Tailored Brands’ SVP of Real Estate, turning up the innovation isn’t as easy as simply flipping a switch. In a rapidly changing environment, figuring out exactly how retail is to evolve is what leaves him scratching his head for a way forward.

“The biggest challenge is there’s so much information. It’s really about filtering out all the noise so we’re not getting cluttered by all the influences, because there are so many,” he said.

Wawa’s Director of Construction, Terri Micklin, believes taking industry innovation in the right direction involves collaboration and keen observation of what competitors are putting into practice.

“One of the best things we can do as retailers is continue to benchmark off one another,” she said. “

"Through learning from what everybody is trying and sharing our ideas, we can better understand how the market is changing.”

To catch all of the responses from RetailSpaces attendees, you can watch their interviews in the two accompanying videos. For a more in-depth look at the latest in store development and design, be sure to head over to our blog.