The industry should be paying attention to this emerging brand

It’s 11 am on a Saturday morning in Manhattan.

A woman in her early 30s leaves a yoga studio in Tribeca to meet some friends for brunch. Still in her activewear, she makes a quick stop to buy her favorite post-workout beverage.

The emphasis here is on “quick.“ She walks through a storefront on Church Street and emerges barely five seconds later, holding a white-striped bottle containing 16 oz of lemon water infused with “activated charcoal.” Cracking the seal and taking a sip, she then pulls out her phone and texts the following:

Three minutes later, in the dark recesses of her handbag, the phone lights up with a notification: Her credit card has been charged $10.83. And then, a follow-up message:

“Thanks Nicole. let us know if you need anything else x”

Fair question. Let’s back it up a bit.

The texts are being sent from a proprietary technology platform built by emerging beverage company, Iris Nova. It sells DIRTY LEMON — a line of premium, low calorie, non-alcoholic drinks designed to “stimulate liver function,” “decrease stress,” and “reduce wrinkles,” among other claims. Further still, the company almost exclusively sells its products direct to consumers via text message. It’s a channel that Founder and CEO, Zak Normandin, refers to as “cCommerce” (conversational commerce.)

Then there’s The Drug Store, Iris Nova’s brick-and-mortar concept. Currently boasting two locations in New York, with another two to open in Chicago and Miami by the end of the year, the stores operate entirely on the honor system, as described above.

If all of this seems confusing, don’t beat yourself up. Just watch Jim Cramer attempt to wrap his head around the concept on his Mad Money segment on CNBC and you might feel a bit better about yourself.

What’s more, you and Jim probably aren’t the only ones confused. It’s likely much of the retail industry itself feels the same.

"We really think that this is the Coca Cola of the future."

And in the same way Jim closes out the interview with a polite, yet condescending “I wish you the best of luck, I hope things work out well,” most brands probably aren’t taking Iris Nova and its unconventional approach all that seriously. It’s easy to dismiss text message ordering and fancy lemon water as nothing but passing fads… but with Normandin making grand statements like this:

“Our vision is to build the next beverage conglomerate. We really think that this is the Coca Cola of the future.”

So far, his company is off to a solid start.

Since launching in 2015, Iris Nova has not only made the jump to cashier-free brick-and-mortar, but it managed to sell an impressive two million bottles of DIRTY LEMON in its first three years of operation.

The direct-to-consumer (DTC) operation has also attracted the right kind of attention, last year announcing $15 million in seed funding from the likes of Gary Vaynerchuck, Kate Hudson, and a host of venture firms, led by the very conglomerate it one day hopes to succeed.

Just last month, the company announced it will expand its portfolio of healthier beverage alternatives, investing $100 million over the next three to five years in emerging brands. By year’s end, as many as 12 will be able to distribute their products via the Iris Nova platform.

In fact, it’s this disruptive distribution method which is largely responsible for the young company’s success. Completely frictionless, customers in all 50 states can place an order with just a few thumb-taps and receive a case of six DIRTY LEMONS the same day, thanks to seven strategically placed distribution centers across the country. By the end of 2019, Normandin hopes to get products to consumers faster than even Amazon Prime can manage.

"There are just so many layers that don’t need to be a part of selling a product to a consumer."

“We have a very high repeat order rate,” Normandin said, noting 60 percent of DIRTY LEMON customers will order again within 90 days of making a purchase. “Having our product delivered directly to a consumer’s home or workplace is a much better way of giving them access than through traditional brick-and-mortar retailers, distributors, and brokers. There are just so many layers that don’t need to be a part of selling a product to a consumer.”

Normandin built his cCommerce platform after becoming aware of rapid retail developments in China. In particular, the massive popularity and functionality of WeChat was a big source of inspiration.

“There are so many ways the Asian market is more advanced than the US,” he said. “You can pay for a pizza or do a number of different transactions all through a messaging platform. We believe that conversational commerce is going to be the next iteration of eCommerce.”

The Drug Store = A Data Gold Mine

At the same time, The Drug Store has become a major part of Iris Nova’s growth strategy.

Originally starting out as a digitally native company, it acquired customers exclusively through social media channels. First launching on Instagram and relying heavily on influencer campaigns, at one stage, Iris Nova was spending as much as $30,000 a day on advertising. Recognizing changes across social platforms were negatively affecting customer acquisition efforts, last year the company decided to reallocate the entirety of its digital marketing spend to establishing a physical footprint. Thus far, Iris Nova’s unorthodox approach to brick-and-mortar has paid off.

“The visibility we’ve received with The Drug Store in a very short period is something we would never have been able to achieve if we were selling exclusively in traditional retail stores,” Normandin said.

And The Drug Store is far from a traditional retail store. But not just because of its take-and-text-us-later shtick. 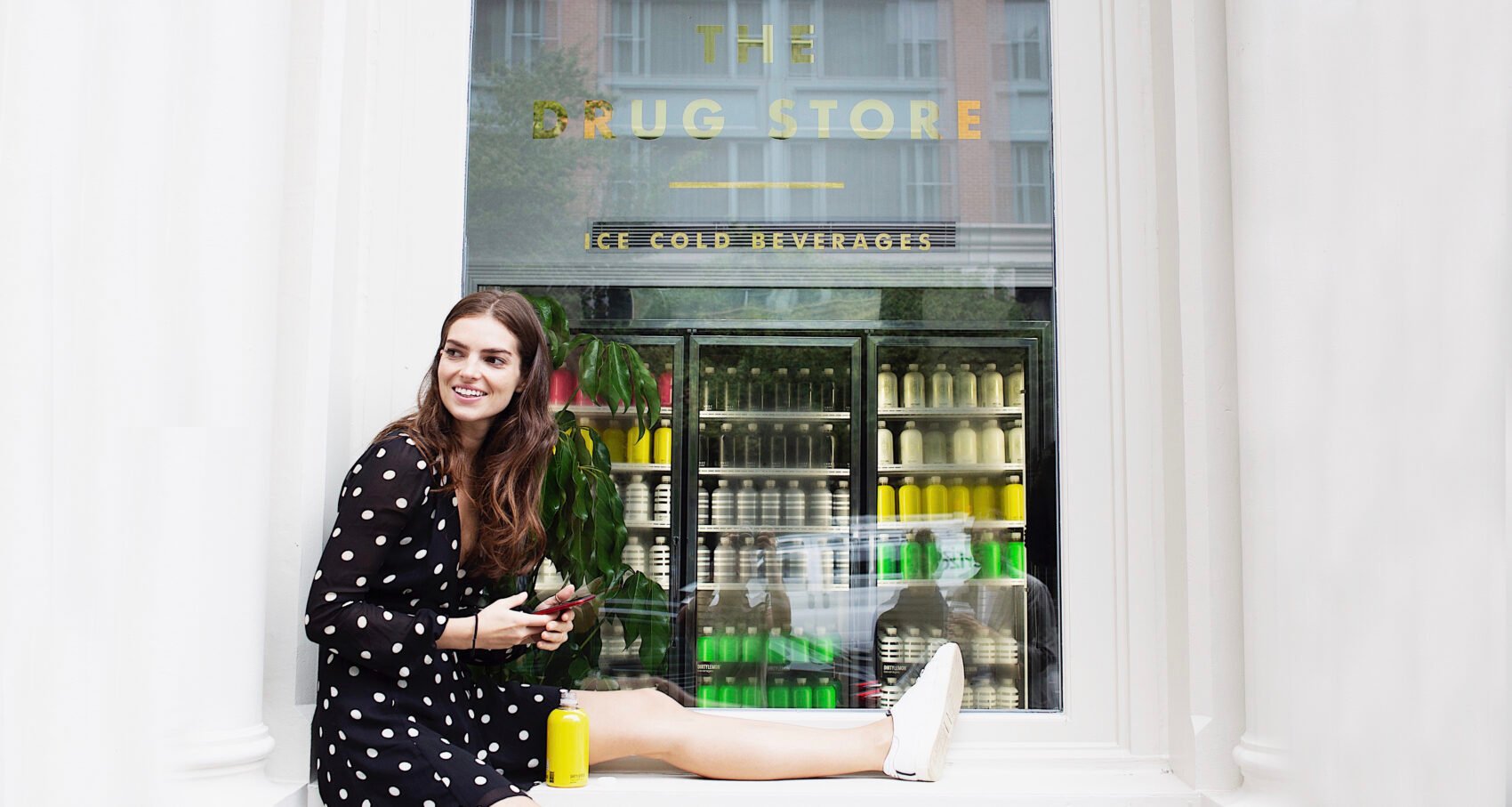 It’s actually out back, past the grab-and-go coolers, where the concept gets more interesting. There, a bar is available to VIP customers (those who order at least a case a month) where they can purchase made-to-order non-alcoholic cocktails from a menu. Every now and then, the bar transforms into an event space, hosting exclusive parties for loyal customers.

While the feature is an extremely effective way for the brand to build an evangelical following, its role as a data collection mechanism is what provides real value to Iris Nova. The drinks customers order at the bar directly inform product development.

“Data collection in this space is going to be an incredibly invaluable asset,” Normandin said. “What we’re collecting around consumption behavior is something Coke and Pepsi and other beverage companies have never had access to, because they’re selling through many other layers of third parties. No one has done anything with tech or any kind of elevated experience beyond selling products through traditional retailers.”

Combined with the mountains of cCommerce data Iris Nova has been collecting over the past four years, with The Drug Store, the company has found a way of leveraging physical retail in a way that goes far beyond merely building an additional revenue or customer acquisition stream. The concept may just be a teeny blip on the radar at the moment, but it provides an interesting glimpse at the potential of thoughtful brick-and-mortar strategy to continually evolve a brand.

“If you believe personalization is the future of CPG (consumer packaged goods), this is something that brands everywhere are really going to need to think through,” Normandin said.

Epilogue: What’s Next for the Store?

To begin, he posed a simple, yet puzzling question:

Pausing for effect, Peterson cast a sweeping gaze across the room

“In the digital age, why do we have stores anymore?”

It’s absolutely something retailers need to be asking themselves. With foot traffic continuing to fall across the board and increasing numbers of stores, as well as entire brands, shutting their doors for good, customers themselves have certainly been asking that question for some time.

And in an age when obtaining products is as easy as sending a text message… who could blame them?

“Imagine the next time you’re out of paper towels, you could just send a text and know you’ll receive that product in a couple of hours or by the very latest, the next morning,” Normandin said. “That’s the level of convenience consumers want.”

By the way, if you still think this method of buying is merely a phase, one just has to look at what’s happening in China. Thanks to services like Alipay and WeChat (which hit a billion daily active users at the beginning of the year) today the country is basically a cashless society. At the same time, China’s total retail sales are this year tipped to eclipse the US. This equates to an unfathomable amount of mobile-enabled orders and transactions. As for Iris Nova, the company may be focused on beverages at the moment, but Normandin was upfront — this won’t always be the case.

“We chose beverages to build this out, but the tech is universally appealing to many different consumer categories,” he said. “I think we’re really well suited to play a big part in that change in commerce.”

But it’s the way in which Normandin and his team are integrating novel brick-and-mortar experimentation against this backdrop of conversational commerce that legacy brands should be paying particular attention to… especially if they possess large store portfolios and a flagging digital presence.

"Retailers really don’t have a playbook for how the next five to 10 years is going to look."

What Iris Nova, along with a growing host of digitally native DTC companies continue to demonstrate is that it’s no longer a debate on online versus offline retail. It’s about crafting an utterly distinct, seamless network of diverse channels that allows a brand to best meet the specific needs of its target customers, no matter how or where or when they like to shop, while also surprising them endlessly along the way. If that means regularly and radically redefining the store, or simply getting rid of many of them altogether, then perhaps that’s what needs to be done. A company clinging to stores just because it’s always had stores is redundant thinking. At the same time, forcing digital disruption to try and “keep up” with everyone else is sure to dissolve a brand’s identity.

It’s a difficult balance to strike. But retailers need to seek different solutions for changing times. Because people like Normandin are bold enough to ask a new breed of questions, others might be inclined to follow suit.

“Retailers know they need to evolve, but they really don’t have a playbook for how the next five to 10 years is going to look. The smart brands are being really open to new technology and new product offerings because they know that they need to change as consumer tastes and preferences change,” he said. “I think it’s such a beautiful thing when a brand can connect with a consumer in a way that has them coming back for more.”

Iris Nova’s Zak Normandin will be speaking at RetailSpaces ‘19 in San Diego (September 15-17). Check out the rest of our lineup, and then secure your spot to stay abreast of the latest disruption in physical retail.