From Apocalypse to Relevance: The Mall is Dead. Long Live the Mall!

Malls are dying; malls are dead. We've been hearing these doomsday proclamations more and more as brick and mortar retailers and shopping centers continue to see declines in foot traffic and sales in this Age of Amazon.

But does it have to be that way?

Lee Peterson says no. At RetailSpaces '18, the Executive Vice President of Thought Leadership for WD Partners said that, in fact, the mall as we know it is dead, but that doesn't mean all is lost. The model simply must change.

At this point, anyone working in retail already knows the broad strokes of why this is, but to paint a picture: There are only about 1,100 malls still in operation, and according to estimates from Credit Suisse, a quarter of them may close in the next five years. Between 2010 and 2013, mall visits plummeted by 50% and have been declining over 8% per year ever since, while e-commerce is all fire: U.S. online retails sales are expected to hit $525 billion this year, and Amazon will account for 50% of the online market share by 2023. And now that Amazon has fully dominated e-comm, it's also coming for your brick and mortar, reportedly considering opening up to 3,000 cashierless Amazon Go stores by 2021.

But if brick and mortar retail is dying (and not just in malls), why is the e-commerce giant making such big moves into that space? Because they figured out how to do it the right way, Peterson explained. When you walk into an Amazon Go store, there are about 15 people there to explain to customers how to use the technology—basically, how the store "works." Peterson compared this to the airline industry of decades ago when agents had to train people how to use the emerging technologies to book flights. Now it's second nature for the overwhelming majority of customers to book all of their travel online and through apps without speaking to another human being.

The key now, Peterson explained, is in creating the brand experience. Vans, the iconic action sports apparel retailer is a wonderful example with their House of Vans locations. The House of Vans is a skate park, live music venue, art gallery, and indie film venue. They have artist-led workshops on subjects like skate photography and mixed media. One thing the HOV does not do, however, is sell shoes. If you're a Vans fan, this is the place you go to hang out wearing the shoes you already bought online.

There are numerous concepts like this now: Retailers for which the store is a showroom where customers can see, touch, try on, and get custom fitted for clothing that they will then purchase online and either have delivered right to their homes or pick up for free in-store. Bonobos has already demonstrated the rising popularity of this model, as have others like furniture store Made.com and high-end fashion retailer MatchesFashion.com. One of the five floors of the Matches Fashion showroom in London is a restaurant because, for the company, the brick and mortar store is not about selling clothes. Peterson referenced a quote from Matches Fashion founder Tom Chapman: "This isn't about the revenue. It's about the experience and the collateral that we can produce."

Even major U.S. retailers are making major shifts in their business models, recognizing the consumer craving for quick convenience by offering BOPIS (buy online, pick up in store) services—Target and Walmart excel here—and pared-down, service-only versions of themselves that don’t stock inventory, such as Nordstrom Local.

"Retail has changed forever," Peterson noted, but does that mean all these old stores and malls are just going to be hulking abandoned spaces? What happens to all of the empty Sears stores, and all the other large anchor tenants and specialty retailers closing inside the malls?

Peterson's company, WD Partners, is an agency that has shaped the customer experience in big box and specialty retail, foodservice, consumer packaged goods, grocery, convenience, and more for 50 years now. Their services include everything from operations planning, branding, and market insights to architecture, engineering, and construction services. The company recently released a white paper called "Apocalypse to Relevance," for which they directed researchers to ask consumers what can be done to make stores relevant again and to get people to go back to the mall.

Over 4,000 people representing a wide-ranging demography with incomes over $35,000 were surveyed on what they would most like to see happen to these empty spaces. They were given a number of options to rank in order of desirability: fitness centers, farmers markets, food halls, indoor sports, beauty megastores, BOPIS, retail showroom pop-ups, green space, health & wellness, co-working space, and more. Choices were filtered to the top two across all respondents and then further broken up into two dominant categories: "digital natives" (ages 29 and under) and "digital immigrants" (ages 46 and over).

What the researchers found was that the mall itself is still viable, even if the stores currently inside of it are not. That retail space is still valuable and people still want to go somewhere, to socialize, to eat, to have experiences…they just don't want to shop.

But they want food, and they want it now. 78% of digital natives want to see these spaces remade into trendy food halls, and 61% of digital immigrants agreed. 77% of digital natives also want to see farmers markets, as did 75% of digital immigrants. To put these numbers in perspective, Peterson said that a response of 40% would mean that the concept is something that should be tested, and a response of 60% means the customer is way ahead of you wondering why you haven't done this yet. 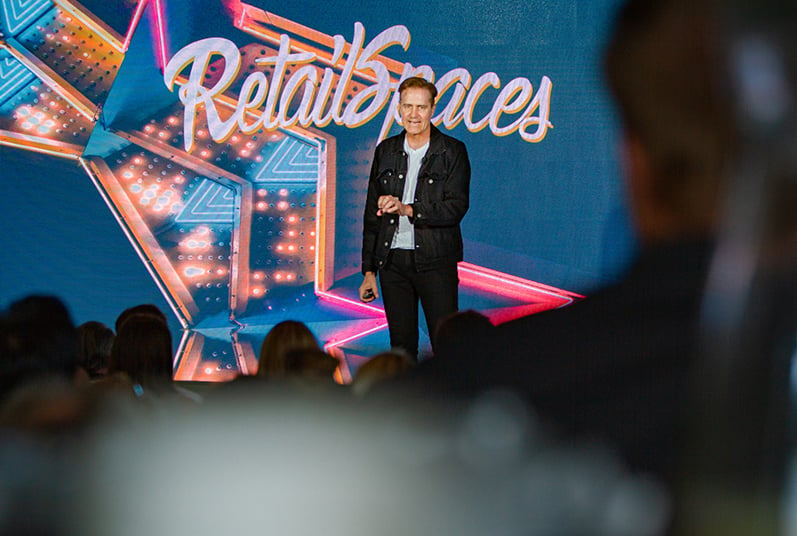 "Food is very lucrative to draw more people in," Peterson said. "For the tomorrow mall, we have to change the whole damn thing. Malls as we knew them are done. They're over. People don't want them anymore. But they're not dead, especially for older people."

The mall of tomorrow is going to need to have a LOT of food, and not in the form of the low-quality food courts of yore. There also has to be a good tenant mix, and not the current two-ingredient cocktail of department stores and specialty retail. People no longer want to go to the mall just for one reason; they want a place they can go play, socialize, recreate, explore, and pick up some food to take home. They want a destination with multiple reasons to visit.

Peterson concluded that while, yes, we're going to have a lot fewer malls in the future, the ones that remain will be a lot more viable—if they are able to evolve with the times.