Why Vans Has Such a Loyal Following After All these Years

Vans has existed since 1966, which means that for over 50 years, people have "grown up" with Vans as one of the purest forms of self-expression through fashion for teens and twenty-somethings. Baby Boomers grew up with Vans; so did Gen X and Millennials. Now Gen Z is making the brand their own.

It takes incredible staying power and authenticity to still be the youthful iconoclastic footwear brand of choice all these generations later, especially as Vans has ballooned into a very mainstream $4 billion brand. During his talk at RetailSpaces, Doug Palladini, Global Brand President for Vans, explained how the company has managed to maintain an authentic connection with its customers, which has propelled them to become one of the top footwear, clothing, accessories brands in the world.

"What we are is a brand that is fueled by our purpose," Palladini said. "To enable creative expression in youth culture; it's that simple. Everything we do is based on this purpose."

Vans started as a skater brand and to this day is still seen as such, though its popularity and appeal has long since transcended beyond skater culture. You would think, then, that Vans has a little something for everyone; that its appeal, especially with its core customer aged 16-34, is about as close to universal as an item of apparel can get.

But, Palladini said, the opposite is actually true.

"At the point where you're passing $4 billion, you have to stick to your guns. You have to be more clear about who you are and what you stand for to grow. As you get bigger you need to narrow your focus, not expand it, to remain relevant and successful."

"As you get bigger you need to narrow your focus, not expand it, to remain relevant and successful. Open to everyone but nor for everyone."

He explained that one of their core principles is being open to everyone but not for everyone, meaning that Vans as a brand recognizes that it simply can't be everything to everyone. By doing this the brand avoids jeopardizing brand identity and “puts a very sharp point of view on who we are," Palladini said. "That's very important these days, especially as we try to reach the next generation in particular."

Vans serves its purpose of being a vehicle for creative self-expression through four filters: art, music, action sports, and street culture. That means saying "no" to a lot of things that don't fit within those four filters, which enables them to continue honing and adhering to their brand identity.

While having a strong sense of purpose and identity is all very well and good, a brand also needs to make money. Palladini said that Vans continues to make money because of the emotional connection it builds with its customers.

"The bottom line is we wouldn't make any money if we didn't connect to our purpose and our culture," he said. "People who come to Vans and learn about us move from awareness to loyalty very quickly because of the emotional connection that's gained, and these days that is what it's all about. It's all about emotional connectivity; if you're focused on transactional connectivity, you're commoditizing your efforts and you're making yourself just like everybody else."

In the '90s that was called "selling out" and it was met with vicious derision. Gen Z customers might not use the same language, but they ultimately have the same aversion.

So how does a multi-billion-dollar brand position itself as something truly authentic, rather than another corporation peddling branded authenticity?

"There's much more to it than the numbers," Palladini said. "What that means is that we fight against becoming a commodity and we fight for being part of a culture."

Footwear is a commoditized product; there's no getting around that. But Vans does things quite a bit differently than other corporate brands selling commoditized goods on a global scale. They don't spend $1 million to slap their logo on a tent at Coachella; in fact, they don't sponsor anything.

"The way that reads to a young person is 'sponsor,' 'paid for.' You damage your credibility when you do things like this."

Instead, they collaborate with musicians like Grammy-nominated Anderson Paak, whose last job before becoming a full-time musician was at a Vans store.

"That's the difference between sponsoring a white tent at Coachella and having someone who's playing the main stage who already loves your product wearing it," said Palladini. "We are focused on building culture from the inside out with people who are organically connected to our brand."

One thing they do sponsor is their annual Custom Culture shoe customization contest for high school art classes; the grand prize winner gets $25,000 for their school arts program and also gets their winning design made by Vans.

"Our job is to enable creative expression," said Palladini. "When we do that we build loyalty; these students will be loyal to Vans for life." 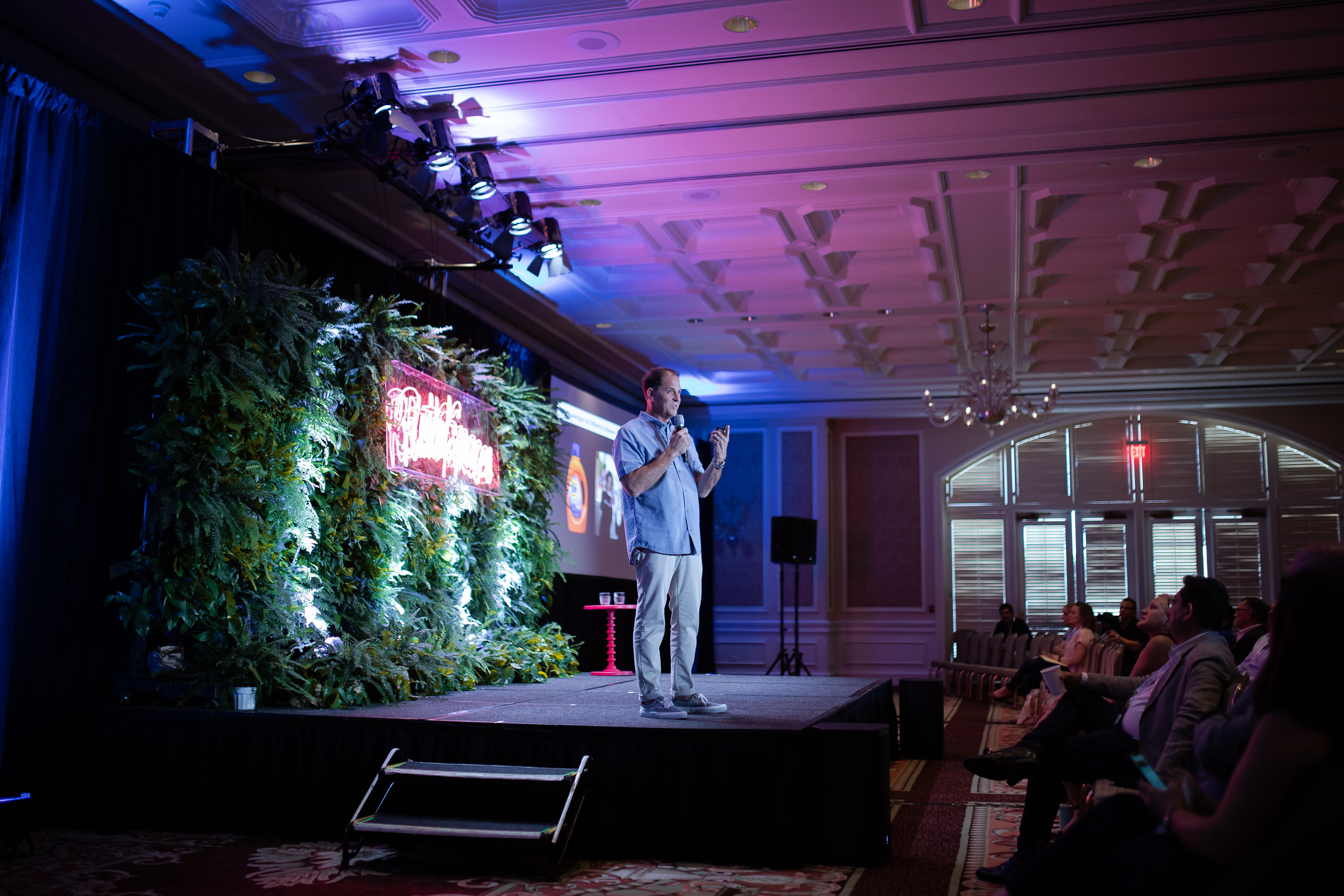 Using Different Kinds of Retail Spaces to Tell One Story

Vans thrives by reaching consumers from the highest boutique level in retailing to the big boxes and everything in between. You can find Vans products carried at the most aspirational retailers in the world like Opening Ceremony, Supreme, and Dover Street Market; but you can also find them at Kohl's, JCPenney, and Famous Footwear.

"[We do that because] we want to reach a different kind of consumer," Palladini said. "We're one brand, but we feel we can reach different types of consumers."

Vans has also started building their own boutique retail stores. In March 2019, Vans opened its first-ever standalone Vault store on the Bowery in New York City, highlighting their apex line—Palladini calls it Vans' version of "couture." He said this store is one-of-a-kind, and they plan on rolling out more boutique Vault stores around the world.

"We're one brand, but we feel we can reach different types of consumers."

In addition to the new upscale stores, Vans has a number of other different brick-and-mortar concepts of their own through which they target different kinds of customers. Brand showcase stores, like the one on 34th Street in Manhattan right across from the front entrance to Macy's, are "mall stores on steroids," large spaces that have just about everything Vans carries. These are "premium high street environments" where the company can justify a lot of square footage because the foot traffic and velocity are so high.

Street stores are located on streets in busy retail corridors, like Rush Street in Chicago and Yonge Street in Montreal.

"These are very good shopping streets in A and B metros for us," said Palladini.

Then there is the mall box store that they "reproduce like rabbits," currently with 550 in North America and a few thousand in different formats around the world, with China being the biggest international market. They also have their outlet stores, which Palladini notes is a great channel for brand discovery.

Global consistency with local relevancy is the Vans mantra, Palladini stated. The brand now has stores in over 85 countries, with over 1,000 stores in China alone, but there is still an incredible amount of consistency in Vans stores all over the world from Beijing to Santiago. The stores look the same and have the same common thread because it is all one brand, but stores are also localized to highlight local athletes and brand ambassadors, and offer products in different fits and materials that suit the local markets.

"That globally consistent message is pretty much mandatory these days with the visibility people have."

So how does a nearly 60-year-old brand continue to remain relevant in the eyes of today's youth?

"Our responsibility is to constantly progress who we are for the next generation, but you do that through a combination of honoring your legacy and progressing forward," Palladini said. "We can't say, 'Let's just make the same shit we did last year because it worked.'"

Vans is constantly updating their designs, collaborating with new people, and challenging themselves with new ideas around colors and materials to keep the product fresh. But they also market their shoes as shoes to be lived in, not to be kept in boxes or displayed like pricey artwork.

"Our shoes… They've been loved," said Palladini. "That means they have been experienced and you have lived your life in this product, and that is what is beloved about Vans."

Subscribe to get the latest RetailSpaces insights and keep up-to-date on what to expect when we hit LA in 2020 (Sept 20-22).

Nicole Rupersburg
Nicole Rupersburg is a writer who has covered the restaurant and hospitality industry for over a decade. Her work has appeared in Thrillist, Cosmopolitan, Fox News, the New York Post and many more. Follow her on Instagram at @eatsdrinksandleaves. ---

RetailSpaces. The retreat for those reshaping Brick-and-Mortar Retail.

What Can Business Leaders Learn From Tony Hawk?

Why Vans Has Such a Loyal Following After All these Years