A recent McKinsey study of 500 CEOs and 5,043 employees confirmed what we all know by now: hybrid models will define the future of work.

With the bulk of the pandemic behind them, only 42% of CEOs believe their businesses would return to being fully onsite, compared to 32% of employees. Thirty percent of CEOs and 52% of employees, meanwhile, foresee a mix of onsite and work from home (WFH) ahead of them. Breaking down the data by sector, McKinsey found that just about 70% of people in knowledge industries expect some level of WFH to dominate a post-pandemic world.

“Think about the ramifications of that,” said Lee Peterson, WD Partners’ EVP, Thought Leadership, at RetailSpaces. “I'm working from home two or three days a week—this is great! I can take my kids to school, I can go to the grocery store for 15 minutes, I can come back and I could finish the job… The genie is out of the bottle. Everybody realizes that work from home is completely different.”

For brands to succeed in a WFH world, they’ll have to go big—by going local. Over the course of his presentation, Peterson offered insights into changing consumer retail preferences, ultimately arguing for brands to embrace the neighborhood as their new organizing principle.

A Neighborhood of Prospective Customers

A WFH world, the data suggests, will also be a shop-from-home world—but also, crucially, a shop-near-home world. While almost 70% of respondents expect to primarily do their shopping online, in-store shopping is far from doomed: only four percent said they'd never shop in a store again. Asked to rank a series of indoor shopping options, 37% said they’d stick to their local stores—more than twice the number that said they’d patronize outdoor malls (16%), city streets (16%), or indoor malls (11%). Asked directly whether they’ll shop more locally from now on, 88% of respondents said yes.

Retailers need to experiment with last mile and pickup strategies.

As survey responses go, 88% is about as actionable as it gets. “Ninety percent of the people are saying, ‘Oh yeah, I am definitely gonna shop more local,’” Peterson said. “Why? They’re at home five days a week. They could be at home more than that. So they take a break, they walk around the store—where are the restaurants? Where are the shops? Where are they? Why haven't retailers moved, or even started to think about that?”

The Power of a Neighborhood

The question, then, is how exactly retailers can embrace the neighborhood’s new status as a quasi-workplace. To answer this question, WD drilled down even further, asking respondents what local retail concepts they’d like to see in their neighborhoods.

The responses were illuminating. Relatively few people were interested in mobile stores or experience stores (16% each), while popups (30%) and showroom stores (33%) earned somewhat higher interest. (Items that receive such placement from 40% of respondents are “definitely something you should test,” Peterson advised. If the figure is 50% or higher, “that test is gonna work.”) In-home services like Best Buy’s Geek Squad were attractive to 35% of respondents, suggesting that brands without in-home offerings might benefit by implementing them wherever possible. “It’s another way to become instantly local,” Peterson said.

What should brands do with this data? Easy: get local. “If you are a big brand and you're gonna drop a small store in my neighborhood, thumbs up,” Peterson said, citing Nordstrom Local and Target’s 100+ small-format stores as exemplars. The strong consumer interest in local brands needn’t be a deterrent, he added, suggesting that national brands can harness it by opening units that look and act like neighborhood fixtures. (See: Starbucks, Alta, Warby Parker, or even Victoria’s Secret, which recently announced it will open four units outside of its typical habitat, the indoor mall.) 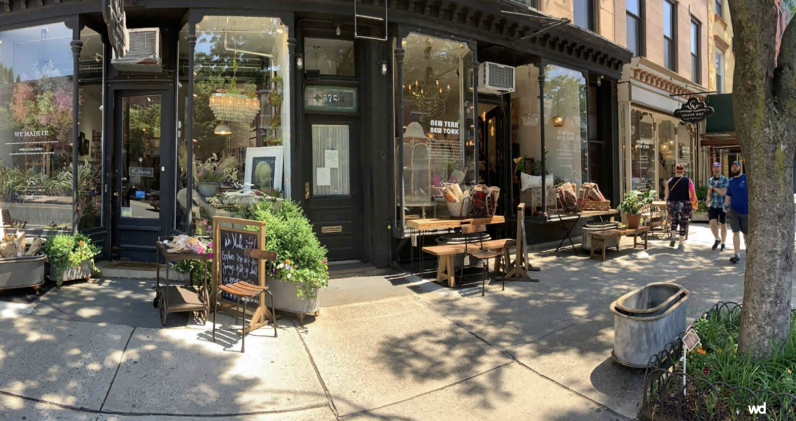 “That’s where retail is gonna be,” Peterson concluded, showing a photo he took of Brooklyn’s Atlantic Avenue. “I'm gonna be at home. I'm gonna run down to the coffee shop. When I get a little break, maybe I'm gonna go somewhere and have lunch. Maybe I could pass some retailers on the way that aren't necessarily the retailers that are in malls.”

“I had to take this picture,” he said of the image—a row of small shops, sandwich boards and potted plants and merchandise adorning their façades, people in shorts and sweats and baseball caps strolling by on a warm day. “Because I started to think, ‘That’s gorgeous.’”