What Retail Can Learn from WeWork's Rollout Model

When Mick McConnell last attended RetailSpaces in 2015 as a featured speaker, it was as Chipotle’s Global Director of Architecture and Design.

By the time the three-day event wrapped up in Napa Valley, he’d walked away with a new opportunity at one of the fastest growing startups.

WeWork co-founder, Miguel McKelvey — who’d also been speaking at the event — was on the hunt for someone to help orchestrate the massive expansion the co-working company had ahead of it. Having hit it off with McConnell, McKelvey realized he’d found the right fit.

Reflecting on the chance encounter three years later at RetailSpaces ‘18, McConnell explained things look a lot different now than they did back then. When he first came on board, WeWork was just shy of 50 locations. By the end of 2018, they had “400,000 members, in 400 locations in 99 cities, in 26 countries.”

In order to enable this kind of growth, the company needed to evolve its development mindset. Specifically, it needed to adopt a retail rollout model. Up until the point McConnell was hired, each WeWork location had been designed bespoke as a one-off project. Developing a system that could scale quickly meant devising a set of standards that could be applied across every project.

“We looked at a huge across-the-board swathe of every WeWork done to date to find out what the common threads were,” McConnell said. The fine-toothed analysis uncovered each location shared 92 percent of the same components. “We immediately landed on what worked, what didn’t work and focused on how to improve the core 92%. The remaining 8% becomes the regional or local customized design opportunity to make WeWork locations special or iconic.”

As the years have gone by, further projects and a wealth of data gained from how members interact and utilize the spaces have helped WeWork craft a “precise genome”. With the use of advanced tech, this design thumbprint can be quickly adapted to suit any given piece of real estate. 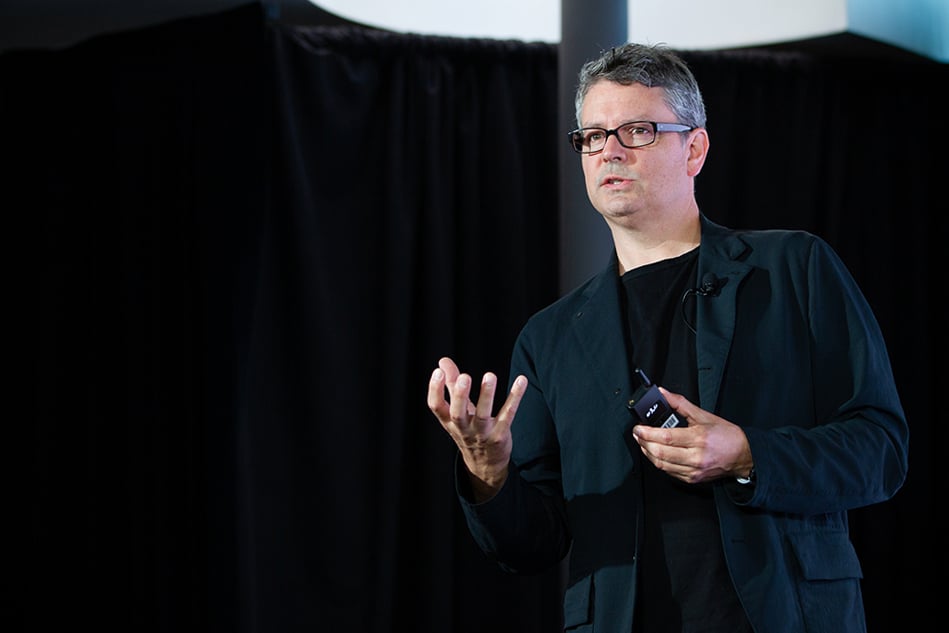 “We go into a space and we laser scan it. We just put the machine in the room, and it does it all on its own. The software automatically creates a floor plan, and then we just hone and refine that,” McConnell explained.

The company also makes use of augmented reality to help visualize furniture and fixture placement, speeding up the process. McConnell stressed the value in narrowing design focus to constantly improve development at a granular level. He used private phonebooths — a common feature in all WeWork locations — as an example. In the company’s early days, a single, bespoke unit required each individual trade to be involved and was considerably expensive. Searching for cheaper, easier solutions eventually led to the development of a flat-pack unit with inbuilt power connections that cost 60% less. With significant investment in “product development,” McConnell said, companies can “explore the future.”

Without these kinds of agile advancements, WeWork simply wouldn’t be able to sustain the wild growth it continues to experience.

“There were 47 WeWork locations to date when I joined, and that was done over a period of four years. Now, we open nearly 30 a month including new locations, new phases and all product offerings.”

Real Retail is on the Horizon

Though it’s no longer just office space that the company deals in. The rollout methods WeWork has worked to perfect will also be applied to a blossoming array of additional ventures. The last few years have seen the opening of a school, WeGrow, and health and wellness concept called Rise by We. Most recently, it’s branched out into single office development with HQ by WeWork.

In 2018, WeWork built on its Honesty Market concept, eventually unveiling WeMRKT. However, McConnell explained this system of curated market stands within WeWork locations was just the beginning.

While many might read this as a sign WeWork means to disrupt retail, McConnell said it will be more about “becoming a platform for entrepreneurs to get their product out there quickly and in the hands of people to try it.” The real potential of WeWork’s plans for retail revolves around its vast global footprint. If a company creates something “they believe is a valuable offering, they could suddenly be in 400 locations overnight.”

So far, the insights WeWork has gained from its early tiptoe into retail have also funneled back into workspaces, it’s primary bread and butter. The advent of short-term retail partners has resulted in a reliance on modular design, which has since led to a WeWork prototype which features reduced wiring, and removable panels and fixtures. Since “everything’s coming up modular” at this iteration, most components have been manufactured off-site.

With the state of retail changing so quickly, McConnell said it’s this kind of finger-on-the-trigger experimentation and execution that the industry could, in turn, learn from WeWork’s approach.

“Get changes out there. Don’t spend so much time on paper. Try something, test it, pilot it. See what happens, collect the data, make improvements, and do it again,” McConnell said, with a rapid-fire cadence. “I think that’s where retailers need to learn. They tend to hire agencies and spend a lot of money on retainer-based systems for developing the perfect retail experience... but there never is a perfect retail experience.”