The Future of Retail According to Ron Johnson

Ask Ron Johnson what he thinks about the future of the brick-and-mortar retail and you’ll get a response humming with healthy optimism.

"I believe the physical place will have the upper hand,” the retail veteran predicted during an exclusive fireside chat at RetailSpaces ‘19 with executive producer Michael Owens. “I think we're entering a golden era for the top 25 percent of retailers.”

It’s a prediction that comes from a man now running his latest venture, Enjoy, out of Silicon Valley, where “for two decades, venture capitalists have been trying to disrupt retail.” Despite these tech-heavy efforts to derail the traditional shopping experience, however, Johnson believes there’s ample evidence that physical stores will thrive.

"The hardest parking spot to find in Northern California on the weekend is at the Stanford Shopping Center," he said. “In the land where they’re trying to kill the mall.”

But his outlook doesn’t extend to the entire industry. While the future may be bright for those willing to radically reinvent themselves, others will surely succumb to the sad fate many retailers currently face.

“It's the golden age for great retailers, but the end of an age for bottom retailers," Johnson said. "When you do retail right, people flock. But they will not tolerate tired retail.”

With a packed room of store development and design leaders watching on, Johnson balanced his optimism with the advice and inspiration necessary for those seeking to reinvigorate the brands they represent.

“You can’t improve your way to innovation. Trying to get a little better will only let you keep up with what’s going on. All innovation comes from your imagination.”

Johnson’s penchant for catchy, bold statements should come as no surprise, considering the company he’s kept across his career.

After a successful tenure at Target, where he helped sculpt the discount retailer into the affordably fashionable “Tarjay," Johnson’s work caught the attention of Steve Jobs.

At the time, there wasn't a consumer business for Apple — it was just a "cult brand for creative professionals." While Apple had great computers, Johnson said, few people were aware, due in large part to the fact that mom and pop resellers and Sears were the biggest retail outlets for Apple products. Jobs tasked Johnson with building out the brand’s own retail structure to help turn its image around, much like he’d achieved at Target.

In order to accomplish this, Jobs insisted on establishing a working relationship some might consider closer than necessary. Shortly after Johnson and his family relocated to California, the 8pm phone calls began… and they continued, every night for a year.

“I felt like I had a girlfriend in eighth grade,” Johnson joked, before explaining Jobs’ rationale for the telephone dates. “Steve told me ‘I want you to get to know me so well that you’ll know how I think. Then for the rest of your career at Apple, you won’t have to come to me for a decision unless you don’t know how I would think about it.’"

"You won’t have to come to me for a decision unless you don’t know how I would think about it."

With Jobs’ trust secured, Johnson went to work, devising a retail space designed to make a statement. To do so, it would need to be big. Consequently, the first Apple store was 6,000 square feet and had 50 feet of frontage, all for visual impact, with 50 percent of the space dedicated to existing customers and 50 percent to discovery. They also introduced the Genius Bar, which turned out to be a genius move on their end.

"If someone is going to switch to Mac, you have to teach them how to use it," Johnson said. The first Apple store opened in 2001; by the time Johnson left in 2011, there were more than 400.

The Uphill Battle at JCPenney

After 12 years, Johnson was ready for his next challenge. That was when JCPenney called, first having him join their board, then asking him to become CEO. Accepting the role, he thought it would be a fun task to reimagine the department store (“Let’s be honest, it’s a completely out of touch, outdated format for the way modern people shop,” he declared later in the chat). Unfortunately for Johnson, Penney’s board didn’t have quite the same appetite for his rapid, dramatic changes.

"We had the absolutely right strategy," Johnson said. "We were going to open 100 shops within the store and compete on engagement and experience and not merchandise, but to do that we had to break bad habits — like lying to customers [about prices]," he said, referring to the perpetually-on-sale strategy that was very popular with major retailers for a long time (and still is, to a certain extent).

Johnson's most controversial move was to take these promotions away in order to build a new base of customers. He warned the board that sales would drop initially, and they did, by 20 percent that first year. After 18 months, the board decided to ditch Johnson and his strategy, returning to what they were used to — though certainly not to their benefit. When Johnson left, Penney's stock prices were around $18 a share. Now they're under $1.

"This was not a company disposed to change," he said. "I misjudged the culture and went too fast...[But] nothing good is easy; you have to will it to success." 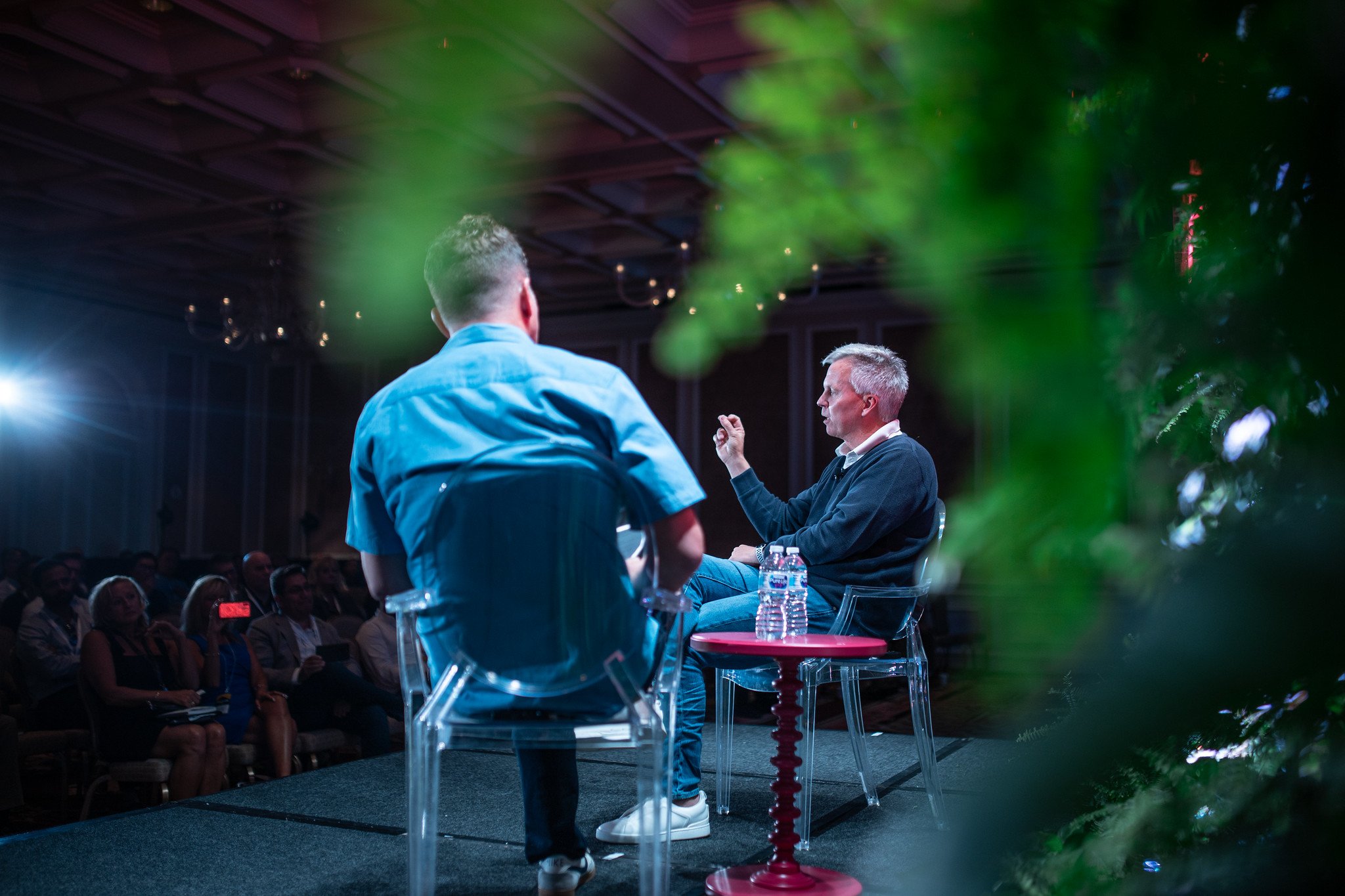 Johnson's next foray into retail disruption comes in the form of Enjoy — the on-demand mobile store that partners with premiere technology companies to deliver their products, along with other services, accessories and complimentary set-up, directly to the consumer's door.

Partnering with large companies like AT&T, Google, and Sonos in the U.S., EE and BT in the U.K. and most recently Rogers in Canada, the Enjoy experience is free for customers. Having launched the company in 2014, Johnson believes the service could be the next big channel in retail.

“We're social people, we're not just going to sit at home and shop all day."

"It's just like a retail store except it's the customer's home or office," he said. "How much deep engagement does Apple get from ‘dumb’ [regular] delivery? Nothing; it's just a cost. When we deliver, we add value through services, enhancing the profitability of that specific transaction."

As a company, Enjoy has no assets, no inventory, and no real estate. Its only expenses are leased vehicles and full-time employees, keeping overhead to a bare minimum and making it much easier to be profitable. At its core, it is still a retail concept, but possibly one of the leanest concepts in the retail space.

Most importantly, according to Johnson, while it may not be an actual store, Enjoy still revolves around place, as opposed to the mere transactional nature of an online purchase.

“We're social people, we're not just going to sit at home and shop all day. It's not a good shopping experience; it's just convenience."

Advice for Winning the Future of Retail

In Johnson’s eyes, there may be several ways that retailers compete, but place, he maintains, has to remain the top priority.

"Place is the physical manifestation of a brand," he said. "That's something you can control and it doesn't take a lot of money to make a great place. Think about how you can reimagine your place, and what kind of experiences you can create there. Don’t get caught up in whiz-bang technology; people respond emotionally to places."

As far as the predictions of retail death-via-digital, Johnson thinks it's all blown way out of proportion. Gaining entry into the golden age ahead is going to require a substantial shift in perspective.

"All [ecommerce is] is the latest disruption to retail," he said. The mall disrupted Main Street. Specialty stores and big box stores disrupted department stores and the mall. Wal-Mart disrupted all of them…until Amazon came online.

"This is just the latest disruptor, but it's the only one that has created the tools to disrupt it back," Johnson said. "Now the physical store has the upper hand because more digital stores are racing the physical than physical to digital. Target and Wal-Mart are better positioned for the next decade than Amazon because of their physical presence."

Like what you read? To keep up-to-date with event developments and insights, subscribe to our newsletter below.