In the age of Amazon, retailers are either evolvin’ or dyin’.

In assessing the current health of brick-and-mortar retail, Walgreens Real Estate VP, Joe Brady, believes the industry is suffering from a condition he calls “ADS.”

“Has anybody ever heard of this?” Brady asked puzzled RetailSpaces attendees during a discussion exploring the state of retail.

“Amazon Disruption Syndrome,” he declared, eventually, to a collective chuckle of understanding.

Amazon’s effect on the industry has not only been significant, but swift. Discussion moderator, Garrick Brown, of Cushman and Wakefield, explained that since 2010, the online retailer has built, leased, and developed 130 million square feet of industrial real estate.

“This means 95% of the continental US now has same-day, or next-day delivery capabilities,” Brown said.

These rapid developments have resulted in an industry changing at an unprecedented rate — something the panel, which also included retailers Sephora, At Home, and Warby Parker, examined closely in the discussion.

“The A-word is not necessarily a bad word,” Brady reasoned, but rather, a rallying call for the industry to do better. “We’ve all experienced personalization and one-click ordering in our own lives, and we love it. How do we make the shopping experience just as frictionless?”

The Problems with Tech for Tech’s Sake

Unsurprisingly, in order to achieve such an outcome, store development leaders have jumped on almost every tech innovation imaginable to evolve the in-store experience.

The danger of such an approach, Sephora’s Jeff Gaul said, is “implementing tech for tech’s sake” — a tendency the cosmetic company’s SVP, Property Development and Real Estate said they’ve worked hard to avoid.

“We’re always thinking about how we can use tech to make the store environment really exciting and get customers off the couch,” he said.

Being able to access the company’s Virtual Artist technology on tablets in-store, for example, encourages customers to immerse themselves in the brand.

The real success of making the app a tactile feature in-store is the way it achieves true physical and digital integration — something Brady thinks everyone should be aiming for.

“‘Omnichannel’ or ‘multi-channel’…  It’s all just corporate speak. The fact is, there’s one channel. For Walgreens, that’s Her (female customers). We need to be on brand whether she’s on her phone, in the drive-thru or sitting at home,” Brady said.

“What Amazon did was personalize things. Personalizing is going to be table stakes before long, if it isn’t already.” 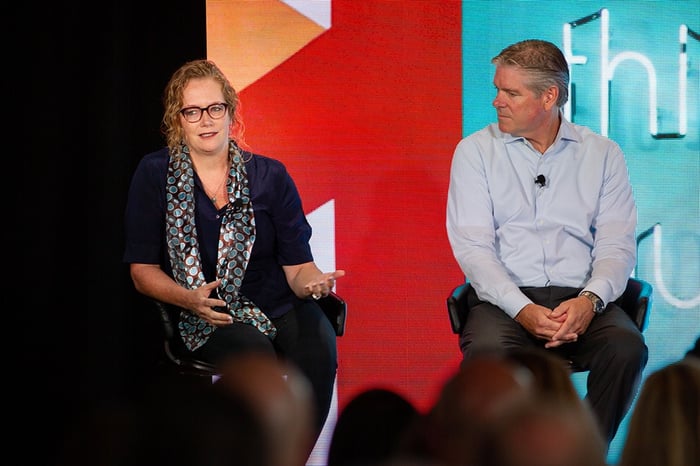 Proof can be seen in the success of brands that truly understand this. Warby Parker is one such company that appreciates the power of multi-platform personalization. VP of Real Estate and Development, Kelly Radford, gave an example of how they achieve this in-store.

“We’ve integrated software to allow people to bookmark a pair of glasses. If customers aren’t prepared to buy, but they want to remember the exact product, they can take a photo that gets stored on their profile.”

As a company that emerged from the internet, armed with a fresh perspective, Warby Parker has been able to disrupt an entire sector with apparent ease.

“We wanted it to be fun to buy glasses,” Radford said. “I don’t think anyone can think back on their life and say, ‘Wow, I really had a great time buying glasses.’ With Warby Parker, people want to go buy them.”

In crafting enjoyable in-store encounters, the company focused on getting the basics right before adding on the bells and whistles. Radford highlighted the importance of optimal lighting and an abundance of full-length mirrors for guests to enjoy the open-shelf layout, encouraging them to touch and feel products freely. Some locations also have photo booths with social sharing capabilities, while an advanced POS system provides vital ease and convenience.

“You barely even know you’ve purchased glasses. You’re walking out the door and you’re getting an email or a text message about your transaction. It’s just seamless. And that’s the whole idea.”

Partnering with local artists and paying attention to detail is also standard practice for Warby Parker in creating unique designs from location to location.

“Even right down to the millwork and finishes… We’re not going to put in Terrazzo flooring at a Houston store,” Radford reasoned, “We’re going to get wood flooring because it feels more Houston.”

At Home’s Chief Development Officer, Norman Mcleod, agreed. Connecting with consumers, he said, relies on refusing “to take a cookie cutter approach. People don’t want just another At Home. They’d rather we try to fit into that community.”

Reinventing the experience of walking into a store is one of the remaining battlegrounds for store development and design leaders. In a reality where people no longer need stores to shop, the new world of brick-and-mortar rewards those eager to shake things up.

Remembering this couldn’t be more important for companies like Walgreens. At 116-years-old, with 10,000 stores, failing to experiment regularly could mean falling into obscurity.

“As retailers and real estate people, we tend to be very linear,” Brady admitted.

“How do we future-proof these boxes to keep them relevant?”

With this in mind, Walgreens’ senior leadership took a risk with a major redesign of what Brady called a “bomber store in Deerfield, Illinois.” By introducing “health partners,” including optometry, hearing, and lab services, the brand is attempting to build its standing as the customer’s “first stop when it comes to healthcare needs.” Proving a popular concept, it’s currently being rolled out across the country.

Avoiding the Boulevard of Broken Brick-and-Mortar

The truth is, companies will need to make bold moves and spend money if they stand any chance of evolving. Also needed, Gaul believes, is a desire to “be fearless. At Sephora, we are never afraid to fail and that culture allows us to say, ‘let’s try something nuts.’”

The brand put that attitude to the test with its smaller Sephora Studio concept. Gaul said Boston’s Newbury Street Studio, in particular, initially attracted confusion, given its proximity to a standard format location just two blocks away.

“The Prudential Center Sephora is a $20 million-plus store for us. People wondered why we would cannibalize that. But what we’ve seen is it’s possible to open a 2,000 square foot Studio nearby and do almost $4 million dollars because it reaches a different client,” Gaul said.

It may be counterintuitive, but big leaps into the unknown like this are what playing it safe actually looks like in brick-and-mortar retail today. Retailers will need to constantly mold a new status quo from the unknown as easily as if it were playdough… just not the kind of playdough you might have been able to buy from Toys ‘R Us.

Rather than let the demise of these companies cause panic, Gaul believes the industry should be thankful for constant reminders of exactly what not to do.

“Is anyone really that surprised that Radio Shack disappeared?”

“What’s going on right now makes me more excited than ever,” Gaul said. “A lot of people look at ‘Amazon’ as a bad word, but to me, competition is what we all thrive on. When you start resting on your laurels, that’s when you really fail.”