When Rachel Shechtman launched STORY in December 2011, she did it with the intention of creating a retail space with the point of view of a magazine. It would be reinvented entirely every month or so with a different narrative-driven theme that would shape the merchandise sold as part of that "story."

There had been 43 "stories" at the point that Shechtman gave her talk at RetailSpaces, and the concept has since been bought by Macy's.

"At the heart of the model is retail media," Shechtman said, a concept that dovetails with the buzzy “experiential retail” of today.

Part of reimagining retail as a media channel is combining all of the different departments that exist in retail marketing—graphic design, store design, and merchandising—into one, because to the customer they are all part of the same experience. Much like how the editorial, photography, design, marketing, and sales teams have to work closely together to create a cohesive magazine or other media product, so too does a physical store's different teams.

In Retail Media, Sponsors are the Publishers

With a media model in mind, STORY's "editorial" content is merchandising and events instead of articles and images — there's a "Letter from the Editor" wall panel at every STORY — and their "publishers" are sponsors. Sponsorships are very important for the concept, Shechtman explained, and sometimes the strangest bedfellows make the best partners.

Benjamin Moore, the paint company, was one of the first sponsors of STORY. They partnered on (Color) STORY, in which the theme was color and the merchandising was done in eye-catching color blocks. While it might not be the most obvious fit, Shechtman said, "Benjamin Moore knows more about color than we'll over know," which gives the unlikely partner both authority and authenticity. When they did their (Wellness) STORY, the sponsor was the global health insurer Cigna—an authority on health.

Other partners have included Pepsi, with which they did a whole campaign telling a story through emojis; Nickelodeon; which sponsored a story with a '90s childhood nostalgia/Double Dare theme; and Peanuts, which sponsored, for the first time ever, a global artist initiative to reimagine Peanuts characters, bringing these characters born from newspapers to life in a physical space and writing merchandise into that experience. Other themes have included "Made in America" and "Home for the Holidays."

"We're moving from a space that sells things to an experience that sells things," said Shechtman. "As an industry, when we're done exhausting the retail experience, I think the next chapter will be about building physical community, and I hope retail can be a vehicle for that."

Side note: For those wondering "If not sales, then what?", the key performance indicator for STORY is email acquisition. They are able to acquire email addresses without a customer needing to buy something, and 80 percent of the emails acquired from non-buyers are new to the system.

There has been a lot of buzz in the industry over the last couple of years championing "experiential retail" as the future of retail, which is why Macy's scooped up STORY a year and a half ago. Shechtman's baby is now an experience inside Macy's, and it has led to the creation of  a new division within the department store called "Brand Experience," which Schechtman is heading up.

When the acquisition first happened, the original 2,000-square-foot STORY store was still open. Prior to being acquired by Macy’s, a typical STORY theme required 24 months of planning. But once STORY became part of Macy's, things moved much more quickly: Shechtman and her team created new products within the first four months, including a small capsule collection created in under 30 days.

"Ignorance is bliss; I figured I would just ask for forgiveness instead of permission," she said. "But we had autonomy. We just kept on going and going and going, and instead of worrying about getting things done within this [existing] system, we curated a new system and asked people to join us as participants, and that enabled us to move quickly. And also having an appetite and an openness to trying new things and having people be a part of it."

"Ignorance is bliss; I figured I would just ask for forgiveness instead of permission"

She explained that when STORY first launched at Macy's, she went door by door and office to office learning the inner workings of Macy's. As a long-established department store with thousands of employees, there were already standard processes firmly in place that she found challenging to override. Schectman ultimately decided that STORY would be the guinea pig for the whole company to develop new ways of doing things and retrain mindsets.

"If we have to build new systems and processes, and we work with small business, and we want to pay people in 30 days without chargebacks, and all these other things, how can we have other people in the organization be a part of it? Over 450 people across the company…were all a part of the process [of building STORY] in some way or another so that they could feel like it was theirs."

Macy’s Rolls Out Their New STORY

After eight months of development, they opened 36 STORY concepts within Macy's stores on the same day. Their idea was to come up with a model that could be agile at scale.

"I figured any process that you could create for 20 or more stores could be scaled to 100 or more stores," Shechtman said. They opened inside the flagship Macy's store in Herald Square in New York City and in 35 other stores strategically located throughout the country, not just on the coasts but representative of the entire American retail landscape.

There was a lot of testing-and-learning happening as STORY was translated from an enclosed 2,000-square-foot standalone concept to a concept located within a massive open-format store. This was once again another area where collaboration between the different departments of the store was crucial, from working with the construction team to dig up the floors every few months to installing very expensive hanging light boxes from the ceilings as the equivalent of their "magazine cover."

"It wasn't just, 'Oh, the brand experience team is asking for it;' [the cool thing was] we had support from leadership saying we have to try new things," she said. 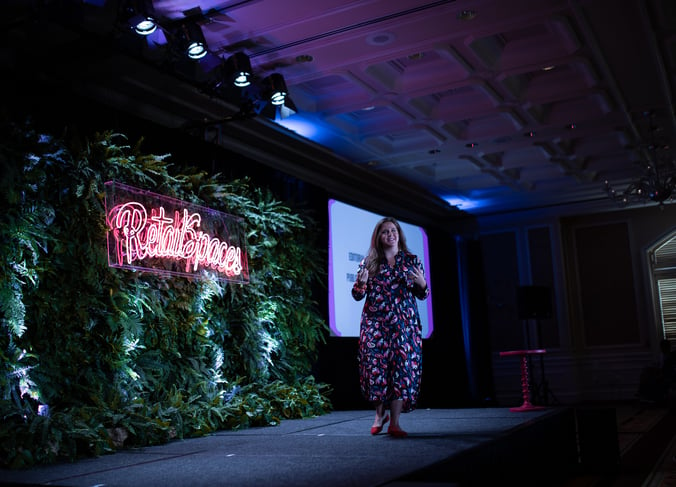 Despite now being owned by Macy's, sponsorships with other brands are still integral to STORY, whether working with existing partners like Mac to test-and-learn new experiences or developing entirely new and unexpected partnerships. With their recent (Outdoor) STORY, Dick's Sporting Goods and Miracle Grow were both sponsors—both unlikely bedfellows for Macy's.

"Macy's is not the first thing you think of in terms of editorial authority in the outdoor space, but go to Dick's Sporting Goods and Miracle-Gro and there's some instant authority and authenticity," said Shechtman. Miracle-Gro rolled out a new direct-to-consumer brand, and, despite Dick's being something of a competitor, Macy’s sold Dick’s products in-store. With collaboration as the new competition, the CEOs of both Macy’s and Dick’s were completely on board.

While this kind of collaboration—between stores as well as between the different departments within the store—might seem obvious in hindsight, it hasn't been the standard M.O. in retail, for Macy's or any other major retailer. A concept like STORY has required retraining employees away from decades' worth of established and ingrained practices.

"I've always thought big companies are very siloed and segmented, and oftentimes incentives aren't aligned for risk-taking and trying new things," said Shechtman. Such a concept also requires retraining the customer's mindset, who sees department stores and big box stores as merely serving a function: You go there, get the thing you need, and leave.

Schechtman concluded her talk by saying the biggest challenge she sees with STORY is how the popularization of automated processes operated by AI, such as inventory ordering, leave no room for the merchant instinct that is integral to the whimsical, experiential character of STORY.

"Until we are robots [ourselves], we are going to respond to things that have surprise and delight and character, and that's probably the biggest opportunity."

Subscribe to get the latest RetailSpaces insights and keep up-to-date on what to expect when we hit LA in 2020 (Sept 20-22).