If there are any silver linings to the massive social upheaval of the last few years, one is undoubtedly the renewed focus on Diversity, Equity, and Inclusion (DEI) initiatives across the American corporate landscape. These efforts have yielded numerous benefits in the companies that adopted them, from increased innovation to positive financial performance and improved culture. But what exactly does it take to craft sustainable DEI operations that deliver lasting, positive outcomes for a business’s employees, customers, and community?

The answer, according to a RetailSpaces panel, is both a willingness to listen and the courage to execute bold new strategies. The conversation included Danni Gallagher, Vice President, Design and Construction at CVS; Bernadette McDermott, VP, Design & Architecture at Public Storage; and Edward Smith, Senior Director of Construction at Floor & Decor. While each company is taking its own unique approach to DEI, their stories underscore the importance of moving dynamically forward rather than languishing in the past.

At Public Storage, the racial unrest of 2020 dovetailed with the pandemic to turbo-charge the company’s diversity efforts. “For a very long time, our design and development team, we actually had a hard time breaking the barrier of getting diverse candidates to even apply,” McDermott recalled. This changed when work-from-home became the norm, making it possible for candidates farther away from Public Storage’s corporate offices to join the company. With increased opportunity came increased diversity. “Giving that hybrid flexibility of working from home… actually opened up those doors and we're actually seeing a lot more candidates,” she said. “It’s been very exciting to see that.”

For CVS, which already had long-established DEI initiatives, the question became: are we doing enough? “All of a sudden we had much more dynamic and courageous conversations internally,” Gallagher said. “We started talking about privilege, and we started talking about the opportunities and what our own expectations were.” Among other things, the company started requiring its contractors to meet certain diversity thresholds—an audacious ask that received some pushback, Gallagher noted, but which ultimately made a difference. “We got on board with helping them figure out how to have subcontractors that became more diverse, and how to increase that spend, and really saw the numbers kind of move in a completely different direction.”

At Floor & Decor, a series of internal diversity panels gave way to a number of new initiatives, like a recruiting partnership with HBCUs Howard University and Hampton University. The schools sent interior design and architecture majors to the company’s offices, where they learned the tools of the trade and gained valuable hands-on experience assisting Floor & Decor’s clientele. “I think the biggest sale we had was $40,000 from one of these 18-year-old students,” Smith said. “These students had never really gotten these kinds of chances from an organization like ours.” Floor & Decor is hoping to expand the program at a national level.

Acknowledging the importance of sustaining DEI efforts past the moment that called for them, the panelists offered varying perspectives on how to build lasting, successful initiatives. For Gallagher, it’s a matter of constant engagement and conversation, ensuring that CVS is ever-responsive to new conditions and avoiding reliance on years-old processes. “We have to be new about it,” she said. “We'll go into our 11th year and I don't want to do the same thing that we did in our eighth year; but I want it to be yet another dynamic conversation.”

Stressing that its recent hiring gains happened organically, McDermott said Public Storage is now engaged in a long-term process of figuring out how to develop DEI strategies that empower minority employees, and incorporate their feedback, without placing undue burdens on the very people they’re designed to help. “We can't just task the same people doing the same initiatives,” she said. “I'm a minority woman; I should not be tasked with doing this by myself.” After a fact-finding and analysis phase, the company’s internal working group will examine how to build on its hiring gains by creating a maximally inclusive workplace and setting benchmarks for vendors and suppliers. 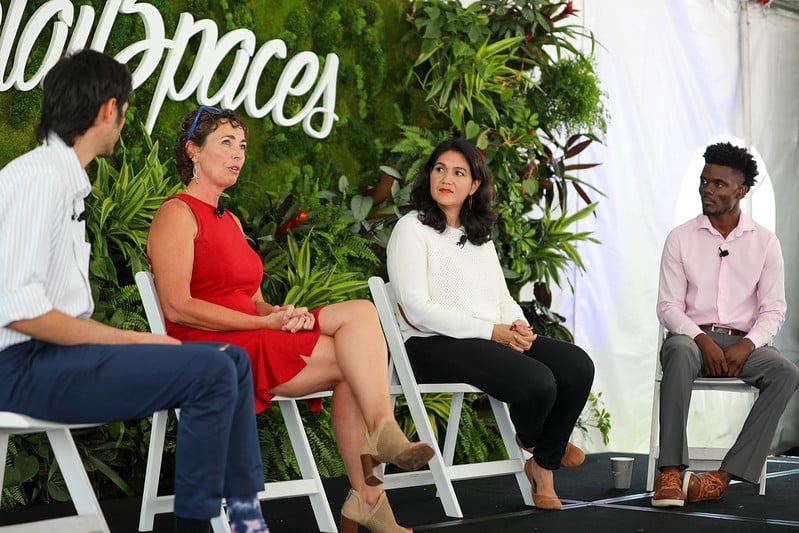 To keep the fire burning under its diversity efforts, Floor & Decor established an independent organization dedicated to holding the company accountable. “It’s completely separate,” Smith said, noting that its members (including himself) were only willing to commit to the project on the condition that it would be for the long haul. “They own no business processes. They're only there to watch it and make sure that we're being diverse, equitable, and inclusive… And so what they’re really charged with is working their way out of a job.”

DEI isn’t just a fleeting trend, the panelists stressed: it’s key to sustainability and survival. Only by bringing in more diverse voices can a company look at the world—its customers, its communities, its services—with more diverse and ultimately more local perspectives. “If we're delivering a product that the local community doesn't respond to and doesn't use, we're failing as a company,” McDermott said. “If we do not recruit and bring in the people and work with the vendors and local communities and create those jobs… we completely miss the boat. For us, we’ll go obsolete if we don’t bring in that diverse thought across the board.

“When we talk diversity, when we talk inclusion and equality, you want that to represent at that local level,” Gallagher agreed. “Be in your community, be part of that fabric of your community.”

These benefits are far from theoretical. When Floor & Decor launched its HBCU internship program, the participants turned in a flood of “super cool and crazy designs” that left their supervisors in awe. “We all turned and looked at each other and said, ‘No one in this room would've done that,’” Smith said. “Because those people were not represented in that room at all.” Now, Floor & Decor is preparing to roll out their designs in stores nationwide.

A little effort goes a long way. As part of its internship program, Floor & Decor’s project managers and designers gave weekly presentations to interior design students at Howard University, explaining various aspects of their jobs. “From there, there was trust: ‘These guys know what they’re talking about,’” Smith recalled. “By the second or third presentation, the group just started to get bigger and bigger and bigger and bigger.”

McDermott recalled a similar experience from her tenure at a general contractor. The firm launched a training program for minority-owned vendors—teaching them how to estimate procurement figures, read construction documents, apply for work, and other basics—that grew so large they eventually had to start turning away applicants. As the saying goes, a rising tide lifts all boats. “The pool of candidates, when I was on the GC side, it tripled,” McDermott said. “The quality of the work that we received from our subcontractor community grew immensely. And we were getting, basically, the companies representing the communities that we were building.”

CVS launched a similar training program several years ago, hoping to help smaller, minority-owned vendors master the tools it takes to support a huge national brand. “We went through this training process and we said, ‘Okay, look, this is what we want you to bring to the table, and these are where the exceptions are, and these are how the partnerships work,” Gallagher said. “It's been awesome because it really throws the doors open. Whether it be from an internal perspective or from how you're sourcing your vendors, it just opens up more.”