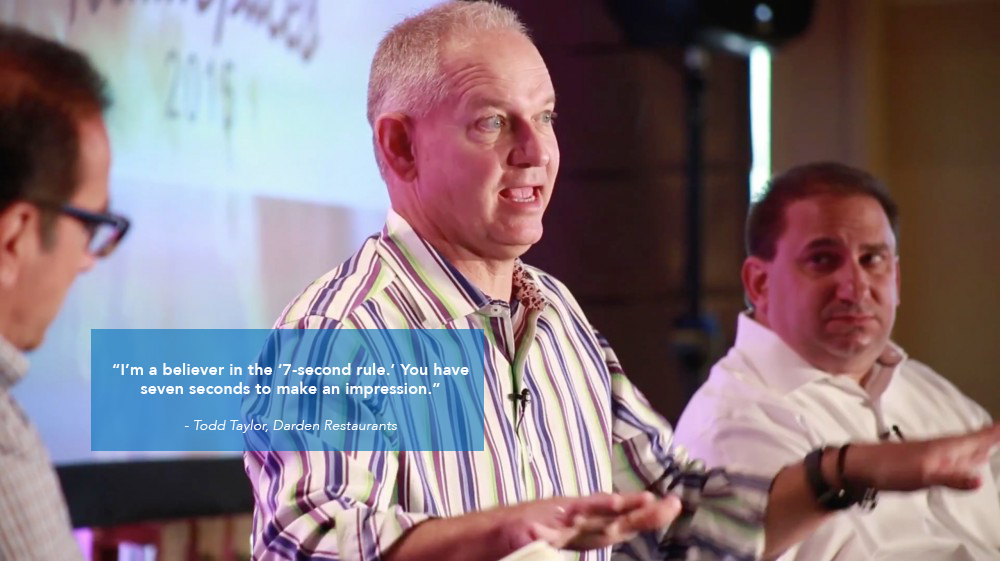 Walgreens’ executive John Miologos facilitated the discussion. Drawing on their experience managing restaurant and drug store chains, Taylor, VP of Design, and Lamontagne, DVP of Development, Design & Construction, focused on the best ways to invest and reinvest in properties to maintain market share.

“I’ve learned there’s a consistent thread that ties those businesses together,” says Taylor, who added, “I’m a believer in the ‘7-second rule.’ You have seven seconds to make an impression” on a potential customer.

The moderator and panelists agreed that keeping their brands fresh is a challenge that requires long-term planning and vigilance. Miologos stressed that it’s hard to turn around once complacent brands allow their images – as well as their brick & mortar locations – to become dated.

“This is a commonality between all businesses,” he says. “It’s much harder to come back if you’ve reached that slippery slope.”

Taylor agreed, citing Darden’s flagship as an example. “With Olive Garden, there was a “don’t touch it, you’ll break it’ mindset,” he explains, noting the popular Italian restaurant’s 12 years of consistent growth. So, when leadership began to notice brand deterioration, it took a concerted effort to right the ship.

“We must remember that your guest of old is not necessarily your guest of tomorrow,” Taylor says. “Fortunately, Olive Garden has been able to recover. I still have a job.”

With large chains like Olive Garden and Walgreens, upgrading an image takes time, says Taylor, who emphasizes setting up 3-, 5- and 10- year plans for renovating properties.

“There are 850 Olive Gardens. So you’re going to be remodeling and refreshing all the time. It costs a lot of money to put forward a fresh face.”

The Walgreens’ Perspective—To Rebrand or Replace?

New in his role at Walgreens, Lamontagne’s 30+ year career included many years in the grocery business, and even a stint Amazon (one that he cannot talk much about).

His role focuses on keeping the brand of a truly titanic chain fresh.

“At one point, Walgreens was opening a new store every 18 hours, and suddenly (we found ourselves with) an average fleet age of 13 and a half years,” he says. “Now, suddenly, you have to have discussion with C-Suite executives on ‘Where do you put your capital?’”

His challenge is balancing the sexiness of funding new creative initiatives with updating and/or replacing infrastructure. “It’s the challenge of getting people excited about replacing parking lots.” 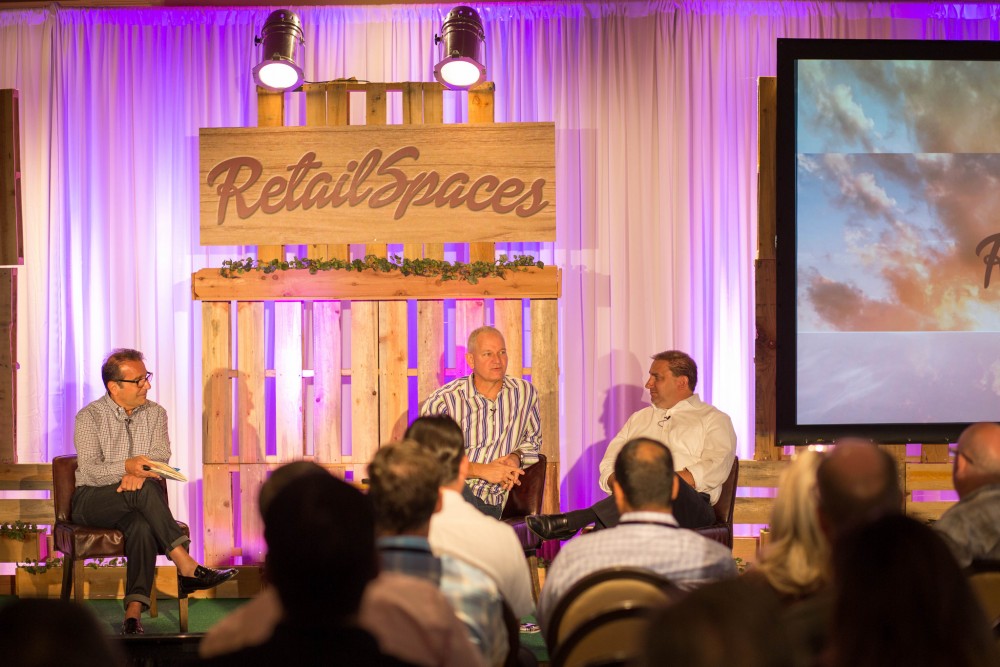 “The problem with (some gradual initiatives) is that it takes five years to make a restaurant look good. That doesn’t really get guests excited,” he says, adding, however, that strategic investment in upgrades is key.

“It’s placing those dollars in the right location and triggering responses from customers.”

He relates an insightful conversation that helped open his eyes to investments that excite his customers, including older diners.

“When I renovate a restaurant, I don’t close them down. One night, during a renovation, we had a guest sitting at the bar who told me how he couldn’t wait to ‘come here next week,” Taylor says, describing the enthusiasm of this patron, a man in his 60s.

“He felt ‘this is my restaurant.’ So, while I was afraid that we were moving the needle too far, it was great to get feedback from a regular guest who told me that it (renovating one of his regular hangouts) made him ‘feel young.’”

Both panelists appreciated the opportunity to address the question “How often do you do a full-blown fleet review?”

Lamontagne says Walgreens is in the process of studying demographics for its older facilities. “For a 15-year old property on a corner in a suburb—the demographics may have changed,” he says, adding that the drug store chain is “studying the mix within each location” to find the best combination of healthcare-focused shelf space and ‘fun’ items based on the demographic makeup of its shoppers.

He dismissed headlines about Walgreens closing locations. “Walgreens is closing 200 stores, but that’s nothing. We have 8,400 stores,” he points out, adding “And what you don’t see is that we’re also building 100 new stores.”

Walgreens is evaluating store locations, frequently doing a “2-for-1” in which they close two stores in a neighborhood that’s oversaturated, replacing them with one central location, he says. “We’re looking at building difference sized locations as well.”

Walgreens has spent millions surveying all its locations to gain a deeper understanding of the challenges it stores face and to get “a better handle on when it’s time to renovate. “

“The business has to determine what does ‘good look like?’ The lens has to be wide in determining the changes to make and where to make them,” LaMontagne says, offering a pointed hypothetical about practical vs. arbitrary decisions. “If the CEO decides he wants all pharmacy waiting areas to be painted the same shade of blue, we now have the database info to determine whether that space actually needs painting or whether you’re just going to do it because the CEO says it needs to be blue.”

Taylor outlined one of Darden’s challenges. “If the mall used to be right in front of you, but it died and moved down the street, you’re on an island by yourself,” he says. The logistical choice is whether to close that now-isolated location and rebuild adjacent to the new shopping facility, or make a concerted effort to bring patrons back to the existing restaurant.

He adds that for older locations in this situation the question arises: “Have they established enough of a foothold in this community that everybody will come there anyway?”

Though Walgreens is developing a “predictive model” for when its stores should be remodeled, Lamontagne emphasizes that this model varies with locations. Stores in Las Vegas and New York, for example, endure much more foot traffic than many suburban locations and those in smaller markets, requiring new carpets and countertops on a more frequent basis.

Meanwhile, Taylor stresses that restaurants offer special challenges. “All seven of my brands are different. Olive Garden issues are very different than Capital Grill. Foot traffic is very, very different in each…and we give our retail managers the chance to really tell us what they need in their locations.”

And, sometimes, replacing features and renovations can’t be delayed indefinitely without impacting a restaurant’s reputation and bottom line.

“The worst thing about a restaurant is, if you walk in and it stinks; you turn around and walk out. So I can’t afford to not replace a carpet,” says Taylor.

“There is nothing worse than a seafood restaurant that has that smell of seafood in the carpets.”

The time customers actually spend in each facility is another difference between restaurants and most retail establishments. “With Walgreens you may have 15 to 20 minutes of shopping. However, with a restaurant, you’re going to be in there for hours,” he says. “If it’s casual, it may be an hour, but if it’s fine dining, you could be there for up to three yours. So, there are so many things for people to see and focus on and you’ve got to keep them fresh.”

You can watch the full discussion from RetailSpaces Napa below. Enjoy!